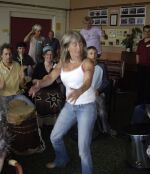 I have finished the UK part of the tour; and will give you my report in this order;

#1. One week of rhythmical/musicial alchemy with James Asher in his studio (our next CD will be out in the Spring)

#4. The Nottingham, (as in Sherwood forrest), Community drum circle benefit for the Therapeutic Drumming Foundation.

Visiting James Asher and making music with him for a few days or a week before I start my UK tour has been a 5 year tradition.

5 years ago as I was preparing for my annual training tour, I received a call from James Asher. That was the first time we met. The conversation went something like this.

James, “ Hello Arthur, My name is James Asher in England. Perhaps you have heard of me?”

Arthur, “Heard of you ? Hell I have all your CDs. Your my favorite Musician. I mean Percussionist. No, I mean Musician."

James, “Thank you, that’s very flattering. I understand you are coming to London and if its alright with you I would like to host you and show you around."

James met me at the London airport and when I got into the car the conversation went like this:

James, “What part of London would you like to visit? Piccadilly Circus?”

James, “Well what about the tower of London.? Off with their heads and all that.”

Arthur, “Been there, done that.”

Over the last few years I have spent a few days at James studio creating great rhythmical alchemy prior to each of my annual fall European tours. 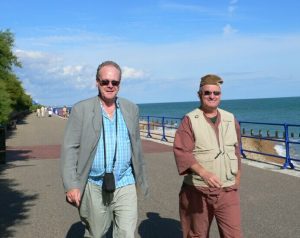 The result is that one of James music companies, Oreade Music, has released our CD, “Sounding the Stones” in the US last year. It has been out in Europe for a while now and is doing well. The CD is a collaborative effort between James Asher and my self.

We have struck up a great friendship so I expect this pattern will continue and you can expect more great music from us.

Here are the before and after pictures: 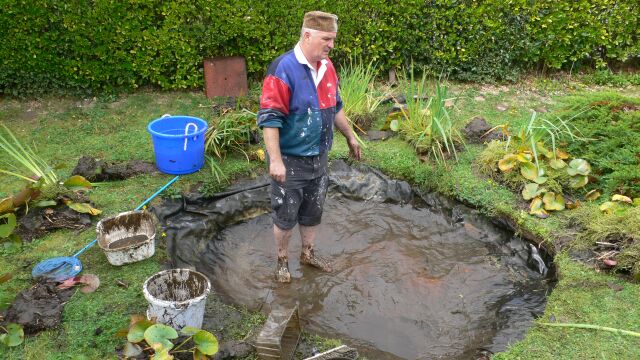 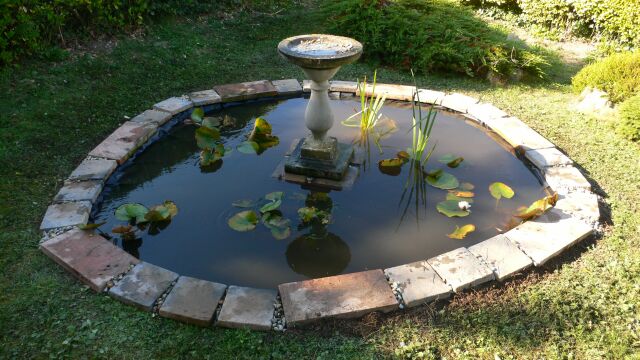 Inspired by what was done at the REMO Recreational Music site to create the first US Drum Circle Facilitators, Somesh, our VMC Regional Program producer, Procured a few extra days from the venue that was to be the site for the VMC UK FRAP.

He secured two and one half extra days in front of the planned VMC Playshop, and announced it on the European internet DCFacilitators dialog list, as a opportunity to have a “Pre-FRAP” Meeting. I immediately intervened on the list to say that Somesh had just created an opportunity for us to hold the first UK Drum Circle Facilitators Conference.

In attendance at the first UK Drum Circle Facilitators Conference were 16 facilitators. 14 of them had graduated from at least One Hawaii Playshop or no less that two UK VMC playshops. 6 of the participants had also graduated from the 10 day VMC Mentor program. 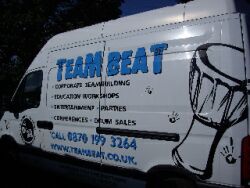 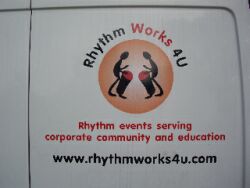 The fact that there were at least 7 vans and vehicles in the venue parking lot that were decorated with Drum Circle Facilitation organizational logos and advertisements, gives you an Idea of the professional career development progress that the UK drum circle facilitators have made in the 6 years since I stated VMC trainings here.

The format for the meeting was created on the Wednesday evening. We had an opening circle where we were all invited to speak freely about feelings - thoughts - topics - ideas concerning the UK DCF community. By using a "talkingstick" each individual was allowed as much time as they needed to air their thoughts and ideas. This enabled all who wished to contribute some uninterrupted time to actually be heard. We then formulated a timetable for the next two days, based on the offerings of several people present and many of the ideas arising from that opening circle.Each presentation was then allocated a time slot with the 'official' start on Thursday morning.

On Thursday morning, Paul Dear presented on “Seeding Community Circles” with the focus on Tithing and giving it away. Paul Dear was the perfect person to start off the open sharing sessions. He spoke to the heart of where I believe the professional facilitator community should come from. Which is—that no matter how successful or busy you get in your facilitation career, leave space to give it away once in a while, if not regularly, by holding FREE community drumcircle events. His basic message was to “remember your roots.” Paul reminded the group that most of them “first met Arthur and was inspired by him at a free community drum circle.” I couldn’t ask for a better keynote speaker for this event.

That was Followed by Jane and Berry Wakefield facilitating a discussion on delivering to “Special Populations.” I thought that they addressed some sensitive areas very gently.

I then chaired the “Issues” discussion by generating, with the group, a list of “Issues” concerning the UK DCF community that came up the night before in the opening talk circle.

We wrote the issues on a flip chart in order to discuss them in sequence.

The list included: Communication - "OY" thats my Patch - Pricing - Clarity - Agendas - Feeling safe on the DCFDialog list, and A & B People in the community - Sustainability - The Wider community - Integrity - Accountability.

We went down the list one issue at a time. This discussion cleaned up a lot of misunderstandings created by the lack of open face to face dialog amounts the principle facilitators in the room. I played the elder (in training), not taking sides, and making sure that the interchanges remained respectful and that every one felt heard.

The conference ran through the full day Thursday, to approximately 3 p.m. on Friday. Lots of diffrient presentations were delivered at the conference that were similar in nature to the first US DCFacilitators conference. We ended with a closing circle, just before registration was to begin for the REMO sponsored VMC FRAP Playshop.

This first UK Facilitators Conference was a very historical meeting. A lot of good will come out of it. Old friendships were renewed and new ones formed. We shared our beliefs, passions, expertise and wisdom with each other. We were able to address some sticky community issues, but most importantly, we played a lot together. A planning community for the next UK conference is being formed. There is talk of scheduling the conference in relation to next years VMC UK training tour.

The facilitators that attended this conference, came away with a renewed sense of connection to as individuals and as a drum circle facilitators collective. All but one of the conference participants stayed over for the FRAP weekend.

37 participants showed up to play with me in my rhythm sand box. It was a great success.

I have been facilitating the "Family Friendly" Rhythmical Alchemy Playshops almost as long as I have teaching the Facilitators Playshop Trainings.

A Rhythmical Alchemy Playshop is a chance to experience my BIG bag of group rhythm games that I have discovered and developed over the years. They come from my long involvement in the areas of dance, theater, music education and street and performance mime. This family friendly program is usually designed for the people who are rhythmically curious, playfully challenged or enjoy improvisation. The RAP includes group ice breaker games, theater games, movement games, facilitation games, body music games as well as drumcircle games.

I have also adapted the program for facilitators who want to fill their bag of tricks with new ideas for their programs.

For the past 2 years, more VMC trained facilitators have been coming to our family friendly RAPs to pick up all the drum circle games and other fun interactive rhythm games that we don’t have time to cover in the Facilitators Playshop trainings.

Knowing ahead of time that more than half of the population for this UK program would be DCFacilitators, we changed it from a RAP to a FRAP. Adding an “F” for Facilitators.

At the Facilitators Rhythmical Alchemy Playshop, I adjust the presentation of the games to be a little more obvious so the facilitators can take notes and adapt the games to use in their own programs.

At the end of the program I announced the two guest facilitators selected for the RhythmStix drumming festival, Simon McCarty and Yvonne Clark. I also announced that for their participation in the Rhythmsticks event, they would each receive a REMO Djembe.

Yvonne Clark, The selection of guest facilitators and the gifting of the Djembes was a simple yet powerful gesture on Gary Man’s part . It spoke volumes concerning REMO’s commitment to supporting of the growing DCFacilitator community in the UK. It was well timed by Gary and well received and duly noted by the people at the event.

The Nottingham, (as in Sherwood forrest), Community drum circle benefit for Berry Wakfield’s Therapeutic Drumming Foundation was a great success. We had a core group of 70 participants with some transient population. Lots-O-Kids and Lots-O-Fun. The circle went strong for 3 full hours with enough space for me to set up some wonderful “jump time” facilitation by some hawaii regulars. We also were treated with jump time facilitation from some new FRAP graduates. A great time was had by all.

Rested and refreshed after being renewed by facilitating a truly family friendly community drum circle, while wearing a Robin Hood Hat, I am now ready to start the rest of this years VMC facilitator training tour.