This was our fifth annual Facilitators training in Germany. They have all been promoted and produced by Mathias Reuter and Bernd Nentwig (lovingly called the "Professor," (Prof. Dr.-Ing.). They own the drumming institute called Percussion+M in Kassel Germany. Theirinstitute is a World War Two bunker with three foot cement walls. One of the few buildings left standing in this industry heavy railroad center after the war. 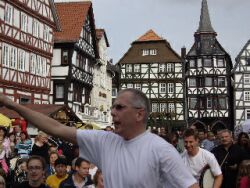 The Professor and Mathias Reuter (behind him), our Germany VMC Producers facilitating at our closing community drum circle for the Basic FAC training.

Their percussion shop is in the Institute. It is a great percussion shop, and rivals John's Music in Seattle. They were regular participants in the early European REMO DC Tours and have been great supporters and advocates of the recreational drum circle movement in Germany.

Both Mathias Reuter and the Professor have not only been VMC's regional program producers but they have also become major corporate and community rhythm event facilitators in Germany. Being good Germans they have kept meticulous records of their facilitation exploits. Besides their regular corporate jobs, in collaboration with other VMC FAC Graduates, they created two extensive school tours this year. One tour in the north of Germany lasted 4 weeks. In that tour they facilitated over 20 schools. They did another school tour that lasted 2 weeks and included events in Austria and Switzerland. On that tour they facilitated as many as three schools a day.

The Population for the Kassel VMC FAC program was 25 people. Two Percussion store-owners from the city of Herpen in Holland, came to learn how to start their recreational drum circle community. Roberto came from India to get some specific information in regards to facilitating the growing Corporate team building programs in and around the Bangalor I.T. industry. He has been working with Abe the REMO India distributer. Although the rest of the program population consisted of "the usual suspects," the demographics are interesting to note as there were a lot of "Cross over" facilitator job descriptions, such as:

11 drum teachers, almost half the population (typical for Germany)

A lot of the participants were beginning drummers, but many of the people bringing experienced facilitation skills from other career fields to the program.

The new VMC FAC Playshop curriculum worked so well that we completed all 5 of the "Platform Learning Exercises" on the first day. That left plenty of room on day two, to do a lot of experiential "Jump Time." 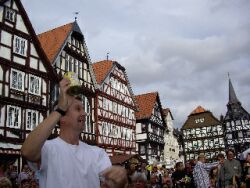 There is a village near Kassel that was not destroyed by the allied bombing during World War Two. The name of the village is Fritzlar and its 1,000 year-old town square still stands. Although tourism is a major industry there, the biggest employer of this village is a Sauerkraut canning company. They hold a Sauerkraut festival in the town square every year. Twice the VMC playshop dates have coincided with the Sauerkraut festival in such a way that we were able to hold our closing drum circle there. This year was one of those times. The Sauerkraut Company put small pebbles into their Sauerkraut cans, creating and passing out 1000 shakers at the drum circle. 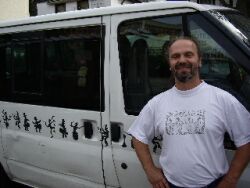 So far, a total of 175 persons have graduated from the 5 German VMC facilitators trainings.

Not many Germans have come to the Hawaii training. So this year we created a two-day advance training, tagging it on to the regular Weekend Facilitators training. 26 graduates of the previous German VMC facilitators trainings showed up to participate at this advanced training event—all having completed at least one weekend FAC Playshop. I basically used the Level 2 Hawaii playshop tasking exercises as the platform foundation for the training. Using a free for all "Jump Time" as an opener I was able to read the group and deliver a program that was specifically directed to their next level of learning. It also gave me an opportunity to introduce them to the new VMC curriculum, exercises and facilitation techniques that we have developed over the last few years. The musicality and relationship of the group was fantastic and by the end of the program we were a fully operational, self-facilitating orchestra. That is my ultimate goal for the whole recreational drumming community.

Whenever possible, VMC creates a free, family friendly community drum circle held at the end of each of the programs we produce. This is a big part our graduation exercise where the students get to co-facilitate the event. This year we have been able to do two community drum circle events, the one at the Fritzlar Village Sauerkraut festival after the basic training, and the one at our usual venue in Kassel, after the advanced FAC program two days later.

The Kassel recreational drum circle is a regularly held event by Percussion+M and fully supported by the veteran hand drumming community in that city. This community has definitely been birthed by Mathias and the Professor over the last few years. When I first met them 7 years ago they started talking to me about their vision of a hand drum community before I could start talking about "My" vision. A rare feat indeed. I also have to say that REMO helped Percussion+m, and played a part in that birth by sending me on those early European DC tours to Germany. This hand drum community has been continually nurtured by the Percussion+M boys as proven by the very healthy family friendly drum circle population that came to our event. (50 Kassel people for this circle, plus 26 participants from the Advanced VMC class plus 10 VMC basic playshop graduates returning from the weekend training = 86 in the circle at the end of "Drum Call")

What made this program totally unique was that it was co-facilitated by veteran facilitators (rather than just-graduated beginner facilitators) with a complete focus on what the group of participants need to get to that magic orchastrational phase where you could cut the rhythm spirit with a knife. None of the advanced facilitators were music Industry "Facilitatiners" more worried about how they look, rather that how the group sounded. Because of this we had a Team of facilitators who were all on the same page. So when one facilitator finished her piece, another facilitator would wait the proper amount of time before going in and offering the participants what they were ready for next.

Five of the participants, attending this program, qualify for the next annual Hawaii drawing. They will have their names put into the hat, and the drawing will accrue January 4th, 2007. The winner of the drawing wins a free 6 day Hawaii training in August of 07(all food, lodging and the VMC training, at their level, is covered by VMC.)

Here is the criteria for qualifying for this annual drawing: If a participant has graduated from a Hawaii Playshop, or at least two Basic VMC Weekend trainings, they become eligible to enter their name in the Hawaii drawing, by completing any other VMC weekend playshop in any year thereafter. January 4th is my birth day and to offer someone from the DC facilitator a free Hawaii Playshop is the best birthday present that I can give myself.

Last years winner was Alex from the UK. He is a Hawaii level one graduate and a 10 day Hawaii Mentor graduate, so he chose to participate in the level two Hawaii training for free this year. The winner before that was Katharine from Germany. She won a level one Hawaii training that she thought that she could never afford.

The total number of people attending the two German VMC facilitator trainings was 51.