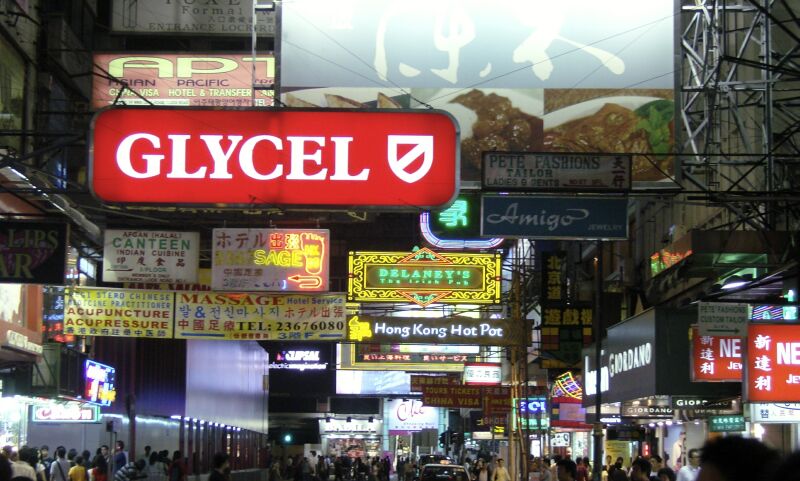 Hong Kong is down town Manhattan with Chinese lettering. It was great to do a full on training in this crazy city. Completing this full 2 1/2 day facilitation training playshop erased the frustration of having to do a 1/2-day teaser training here last year. Two people from that training came to this one. 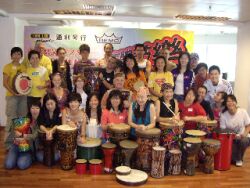 Although we started the program at 8 PM on Friday night, we were completely done with the 5 level platform learning exercises by 4:30.on Saturday (High tea, in Hong Kong and London). This proved to me that the new curriculum works as well in the weekend programs as it did in Hawaii. The new curriculum gives a lot more free form jump time as well as more opportunities for specific tasking jump time. It helped that it was an English speaking training, with no need of a translator. I am so pleased.

Kumi helped birth the recreational drumming community that is thriving in Hong Kong. Kumi (Hawaii graduate 01) helped translate my Drum Circle Spirit book into Japanese. She has been doing community drum circles for Tom Lee Music every month for 5 years. She also has a monthly drum circle at the Hong Kong Fringe club and holds Monthly Full Moon drum circle at the Nzingha African lounge where she regularly teaches west African drumming. She made a big difference in this VMC facilitators training by being an advanced model for the beginners as well as taking on some mentoring responsibilities during the training.

Marko has done strictly kids circles in schools throughout Hong Kong since he graduated from the Hawaii Playshop in 04. (200 schools so far this year) He had two Kids programs to do during the training weekend, so he was at the Playshop whenever he could be. When he was there, I also tasked him as an advanced model. I had both Kumi and Marko do mini-drum calls after breaks in the training where I gave them public critiques. A little facilitator ego death for them but good learnings for every body. 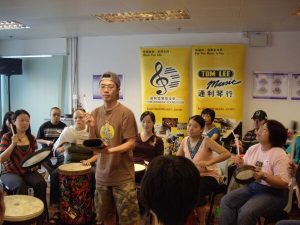 3 Music student, 2 of them had attended my rhythmical Alchemy Playshop in Vancouver in the spring

3 Corporate, one team building company sent up a corporate facilitator from the Philippines

The rest were recreational drummers.

It is interesting to note that there were three Western expatriates attending who are living in China. All of them were music teachers. One each from the UK, Australia, and the U.S. 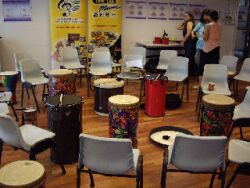 The "Complete" REMO/ Arthur Hull facilitator kit was waiting for us at the training site. We set it up and demoed it during drum call on the first day. The heads of the new Nesting Drums came off and went on easily. The sound, timbers, and pitches of all the different drums were well balanced. The kit works very well for up to 50. (56 if you use the nesting drums with one head and turn the other heads into frame drums) I am proud to have my name on it.

The Hong Kong Community Drum Circle was held in a gym in the same community recreation center as the Playshop training. The Gym was well packed with acoustic panels so it did not sound like the usual gym echo chamber from Hell. The circle's Population was around 100

Just before the event, I did a newspaper interview with Chiang So Ting from Ming Pao daily News. During drum call, I conducted another interview with a person from the Sing Tao news agency. I warned her ahead of time that I would be running into the circle when the players needed me. Kumi and I shared drum call duties so I had time to have an interview in-between the rhythmical transition points that happen during the beginning of any event. Lots of newspaper cameramen at the event. 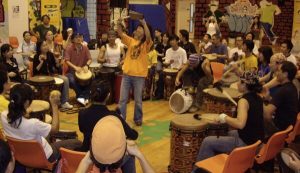 Kumi did a great job at the community DC drum call. She established the facilitators body language, educated the group about the transition point by waiting for it to develop into full blown rhythm trouble before going in and saving the day. After the drum call, and a welcoming piece, I opened the circle up to jump time for the graduate students. How they facilitated that event show me how well the new Dictator, Director, Facilitator, Orchestra Conductor tasking jump time worked in the training. In the beginning drum circle they kept their facilitation sequences short and simple, following Kumi's and my example. As the two-hour program progressed, they allowed more groove time to elapse in-between jumps. The graduates’ facilitation of the group became more sophisticated as the groups playing ability improved. And so we followed the "Anatomy of a Drum Circle" Map, all the way to a great finish. 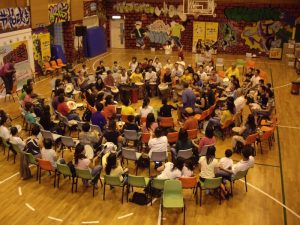