India! What an intense and amazing collection of smells, sights and sounds. In that order. This was my first time in India but certainly not my first time in a third world country. I saw more brahma bulls in Bombay-Mumbi than I saw stop lights. But as I found out, stoplights are only considered as suggestions to most drivers. Motorcycles, three wheeled motorized rickshaws, mini- cabs, colorfully painted delivery trucks, and BMWs fight for every inch of road in this city. Even the white dividing lines (when they are there) are also considered as "suggestions.” 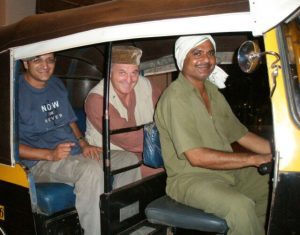 Zubin Blazer greeted me and hung out with me for my whole visit to India.

Zubin was my main drum support shill at both Mumbai circles. Zubin, from Pune India, is a Hawaii Graduate and has often been in America apprenticing with Heather McTavish on special needs circles. He works full time with different special needs populations in Pune. I watch a 20-minute video of one of his projects. I watch a time-lapse video of Zubin using drums and a harmonica working with special needs autistic kids. They were unsocial, nonvocal, inattentive and hyperactive in the beginning and much more social, talking, socializing and more attentive after 6 months of visits from Zubin.

We Pre-set a REMO Drum Circle out the front entrance of the show. I saw that the show population was low. So I reduced the chairs by half. We had a two row, 50-chair circle with an extra stack of chairs placed in three places. REMO banners all around 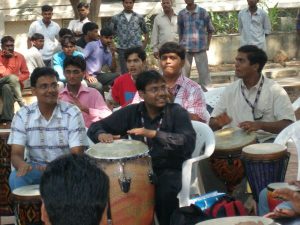 As we started we gathered a lot of spectators but only a few people sat down and we didn't fill the circle until Abe, the REMO Rep in India, and I took drums out into the "Audience' and enticed the people into the fun while Zubin held the circle together. Once we filled up the first two rows, as I did drum call, Abe and his helpers set up and filled up a third row wit participants.

India is a rhythmaculture with a 5,000-year drumming history. So it was not surprising to me that these Indian participants in this circle, played together very well.

The third row became the transient row, as people came and went through out the event. But most of the drummers in the two center rows stayed, allowing me to do more than just a transient drum call circle. I was able to do some more sophisticated drum song sculpting and a little showcasing.

About one third way through the event we had a big closing transient point where the curious left and the excited stayed. I had a circle of about 20 players who knew what they were doing. The playing was hot and furious, (Mostly Guys). The transition points were far and few in-between. So I got a chance to just sit down and "PLAY!”

It is nice to remind myself that as a facilitator, I can also be a drummer. I had tuned up my favorite REMO Arthur Hull Signature Series Rope Tuned 13" Ashiko and wailed with the rest of them. It was an exciting circle with great, locked in rhythms.

Sitting next to me was a 10-year-old boy named Siddharth. As I found out later he is a professional drummer. He sure played like one. When the circle became the Di-Hard players towards the end of the event he held his own with the big boys. So I showcased him and he did a great solo while the rest of the circle hit accent notes. 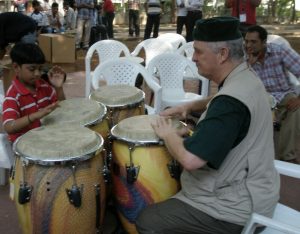 At the end of the circle, after all the thank yous, and shmoozing, Siddharth came up to me and said, "Teach me something.” So we sat down and I taught him the West African Mombassa rhythm. He picked it up immediately so I show him how to play it on three drums. Once again He picked it up immediately so I taught him a calypso rhythm from Trinidad. He picked that rhythm up immediately so I placed one drum in front of each of us. We sat facing each other with our drums touching. I then placed one drum on either side of us so that even there were only four drums between us we both played three of them, sharing the two side drums. This was possible because as Siddharth played the "Up Beat" oriented Mombassa rhythm, I was playing the "Down Beat" oriented calypso rhythm in such a way that we never played the side drums, we were sharing, at the same time. The result is that two drummers create a drum song that sounds like four drummers.

They are changing all the British colonial names in India, so the city of Bombay is now called Mumbai.

My "Tithing" Circle for this visit was at the "Saint Catherine of Siena School and Orphanage for Destitute Children.” They pull the kids off the streets and from street parents, who are trying to sell their children, and cloth, feed, house and teach them.

The population of street kids in Mumbai is amazing. Their choices for surviving are begging, stealing, pick pocketing in gangs, scamming or prostitution.

In the Victoria district, where there are a lot of foreigners, the street kids come up to your car window and either spit on it and wipe it with a rag, do some quick juggling and hold out their hand, try to sell you stuff that "Fell off a truck", or if your window is open tell you that they are hungry. 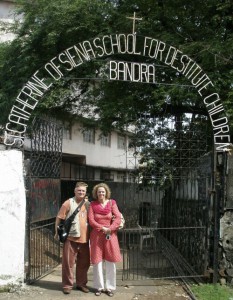 This Orphanage had 230 healthy, well-dressed and well-behaved children along with 40 helpers. The age span of the children was from16 years old to kindergarten kids. The helpers were mostly young woman in their early 20s.

There are many different tribal dialects spoken throughout India. Being an ex-British colony, English is the language everyone understands and speaks in mixed company. But many of the youngest street kids in the Orphanage were not English educated and only spoke Hindi. So when it came time to work with them, I spoke Arthurian gibberish, which worked just fine.

With only 190 REMO drums and Percussion available I had the schoolmaster divide the population of kids in half for two drum circle events. We pre-set the circle in the compound under the shade of the trees, in "orchestrational” fashion. (A drum in every other seat & Percussion or sound shape in every other seat). We sat the oldest group of kids down in a covered patio section overlooking the drum circle. I then divided the kids into three groups, by age and class level. 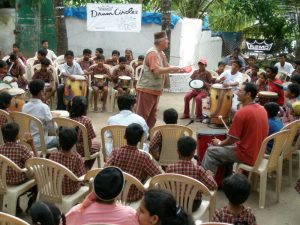 The oldest kids went in first, filling up the inner circles and playing the biggest drums. While the two younger groups watched and waited. After 15 minuets, while the first group played, I invited the next youngest group of kids to fill up the next row of seats and join in the music. 15 minuets later I added the last group in "Drum Call" fashion and we played in full plenum for another 15 minuets.

The next group of kids that were brought in was the youngest half of the Orphanage population. This group started at "4th standard" class went down to "senior Kindergarten.” When I went through the same scenario as the circle before, I found out that there was not enough room for the youngest "Junior Kindergarten" age children. So they had to sit and watch while I ran the second circle.

After the second circle was finished and cleared out, I invited the "Junior Kindergarten" age children to sit and play whatever instrument they wanted. There were plenty of chairs and instruments left so I also invited all the young women helpers, who had been patiently watching both circle events, to join in. I am not sure who was more excited to play, the Junior Kindergarten kids or the helpers. Non-the less, the age mixture made it a fun and exciting drum circle for myself as well as the "Kids.” These circles were not only a gift to the kids. It was a gift to myself. When I encountered the other, not so fortunate, Bombay street kids, I knew that there were places in the city like the Saint Catherine of Siena School and Orphanage for Destitute Children that could help them. 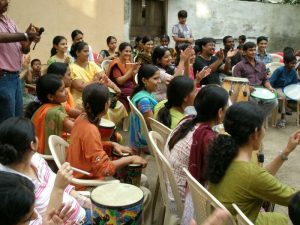 This short stop in India was purely a REMO sponsored Rhythmical Evangelism part of my tour. For the past 12 years REMO has been sending me around to do hundreds these type of drum circle demonstrations in cultures and countries that has never see drum circles before. A few more visits in India and we will do a VMC FAC Training.

As seen what has happened in Europe and Japan over the last few years, these REMO tours have made a significant impact in the growth of recreational drumming throughout the world. Although REMO still supports me in this type of Rhythmical Evangelism, the majority of stops on this REMO sponsored tour is focused on the Village Music Circle's weekend Facilitator Playshop trainings.

The REMO Rhythmical Evangelism drum circle tours have given me the opportunity to "Give the people Fish," But this REMO sponsored Village Music Circle Facilitator Playshop training tour is giving me the opportunity to "Teach the people how to Fish for themselves." REMO, the man, and REMO the company have been supporting the growth of this recreational hand drumming community long before we even had a community.

This tour is just another example of REMO putting its money where its mouth is.