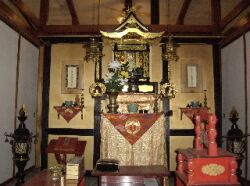 Last year I did a "drum-about " in Japan. I visited six cities throughout the country that have well developed recreational drumming communities. These communities were started nurtured and facilitated by Village Music circle Graduates who attended at least one Hawaii DCFacilitator's Playshop.

This was our forth Village Music Circle program presented in Japan in the last three years.The training was held once again at the Buddhist Temple in the Village of Oshino-mura at the foot of mount Fuji.

We had 32 participants in this program. As I did the Demographics I generated a list of "Usual Suspects" that show up to these trainings.

When I ran out of categories to demograph, I knew that there were a number of people who had not identified them selves. So I asked how many people were recreational drummers. We all got a big laugh when every one in the room stood up. So then I asked how many people came to the playshop specifically because they experienced a facilitated drum circle and came to be a facilitator.

I found the 8 people who had not fit into the usual categories. This is a new paradigm shift in my training population, recreational drummers. Duhaa! Something that I will pay attention to in other countries.

As in standard Hawaii Playshop style, the advanced participants, who had come early, drummed at the entrance of the temple as the participants arrived. When Shozen, the temple priest, would drive his van out to pick up a group of participants at the village buss stop or train station, the greeters-players would know that he would be back in 5 minuets with another load of guests and they would get ready to play. 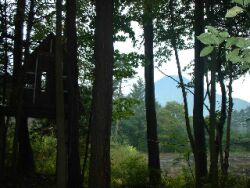 My tree house is on the left, Mount Fuji on the right

Once again my room was the tree house in the forest behind the temple. I sat on the balcony of my tree house writing, while listening to these short bursts of happy rhythm greetings throughout the day. As more people arrived and joined the greeters, each rhythm groove gradually became more powerful and lasted longer until almost the whole group was out front, including me, drumming and greeting the last arrivals.

We are starting to build a family of facilitators here in Japan. In this VMC playshop population there were 7 Hawaii graduates, and 5 weekend playshop returnees. They are all in communication with each other through out the year and work and cofacilitate with each other in certain situations. 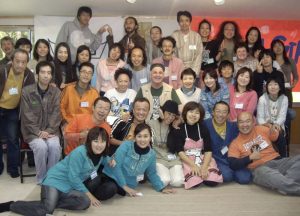 This was the best Japan facilitators training ever.

There were three major factors that made a difference:

#1. With REMO Sponsorship, we had all the equipment I needed to demonstrate what the perfect drum circle orchestra could be. Japanese DCs are notoriously high on djembes and low on medium pitch drums and small drums like talking drums and Bongos. Japan DC's are also usually low on bell and wood mixture as well as bell and wood sound variety. With the new REMO Crown Gongquogi bells and plastic wood blocks, we had a great percussion section with a wide range of tones, timbers and pitches and a full range drum section. A fine selection for a DC Orchestra. The REMO distributer from Japan is now importing the Arthur Hull Nesting drum and facilitator sound shapes that I have designed specifically for facilitators. Now the Japanese DCFacilitators can have a powerful variety of tools in their DC Kit to adapt to any event and population scenario.

#2. the new Facilitator Book, and the curriculum that goes with it, has sped up the training process. Now I can meet my training goals with lots of extra time for jump time and play time for the students.

#3. The fact that we started the program at 2 PM on Friday, (instead of the usual after dinner start at 7PM), made a big difference in how much we were able to accomplish on the opening day. The curriculum map, triplicities orientation, Standing in the circle, Body language, Start, Attention and Stop exercises were all completed by dinner at 6 PM.

Full group intervention, rumbles, call and responses, Platform and half circle sculpts were completed in the evening, after dinner. That included advance jump time tasking in-between each activity. Every thing I said had to be translated in Japanese. I wore out translators like a race driver wares out tires. All of this was completed by the end of the first day. A great start. 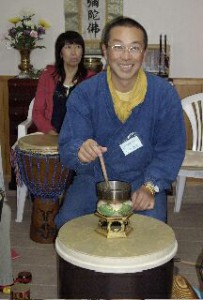 Shozen and his temple Bell from his mini Altar (behind him)

Kaoru then pulled out a balloon. She initiated a "Balloon Rumble" by tossing it into the air. The group would rumble as the balloon floated into the air, getting louder as it went up and softer as it went down. Then whey would stop when she caught it.

After she tossed it and caught it a few times she tossed it to a player in the circle, thus instigating a series of rumble tosses all around the circle. All this happened over the chimes and voices. Once the balloon touched the ground the rumbles stopped and Kaoru gently layered the drums back into a trance groove. Such grace and beauty.

Now that Shozen has finally graduated from a full weekend FAC Playshop, he will be holding regular community drum circles at his site. Our annual closing drum circle at the temple has started creating interest in the Village. There are now drum circle facilitators on a few new Japanese islands that had not yet been infected, or affected, by percussionists.