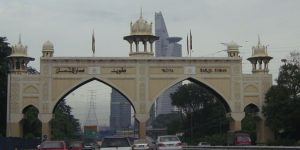 In Kuala Lumpur everybody knows the English of their trade.

Next to Singapore and the Philippines, Kuala Lumpur has the highest English Proficiency in all of Asia.

You can go into Hong Kong and speak "Business English" in conferences and workshops, but to get around town on the streets you better speak Cantonese. Not only did the participants in this Malaysia Facilitators Playshop speak better English than me (I SPEAK AMERICAN) but they got all my jokes that are usually lost on the English. 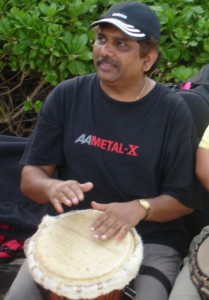 My last visit to Malaysia was 10 years ago. Back then I met Edwin Nathaniet and played with his Latin percussion band in Kuala Lumpur. He was inspired with what he saw in the circles that I did back then and started working with mentally and physically challenged kids and Church youth using rhythm-based events. This time I got a chance to play with his new World Beat group; Aseana Percussion Unit, or the APU, at one of their performances. I also got to play with some of his students at one of the corporate programs that I facilitated while I was there. Knowing that I would be in Kuala Lumpur this fall he did this last August Hawaii training in preparation for my visit. (This time I got to sit in with his new world beat band) 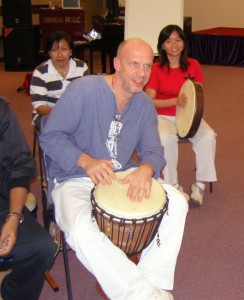 John Hagedorn did an amazing job of producing and coordinating this playshop. It was very Kaoru like, which is a very high complement.

Before I arrived in Malaysia, John wrote three Newspaper articles and submitted them to the Star Journal, a major Newspaper in Kuala Lumpur.

All three features were accepted and printed, (in succession), on the front of the paper's social section or in the events section. These articles were the major out reach for the Facilitators Playshop here in Malaysia. Twelve of the 36 participants who came to the Playshop attributed the Star articles as the reason they registered for the program.

John H. also set up two radio Interviews for me prior to the weekend.

One was pre recorded, MIX-FM, to be played back the next day and the other one, RED-FM, was live. We brought percussion instruments into the studio, rounded up the radio's office staff and forced them to be a live radio drum circle. The pre-recorded program was aired at the same time I was live on the other radio station, so I was at two places at once at the same time on the same day. Since they are the 2 most popular stations in town we covered a large population of radio listeners in Kuala Lumpur.

My Two Tithing Gigs in Malaysia:

I had some time before the VMC Facilitators Playshop, so we did some tithing gigs. To Tithe means to give back 10% of your income or energy to your church. Since my church is the church of rhythm I try to make sure that 1 in every 10 drum circle events that I do is free.

I try to do tithing gigs with populations that would not otherwise get a chance to participate in a drum circle or who can't afford my fees. 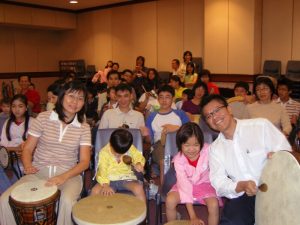 Yamaha is our REMO sponsor for this part of our trip and Mr. Chiam, head of marketing for Yamaha, is the president of the Bandar Utama Buddhist Society. He donated the Festival hall at the Yamaha headquarters and the REMO facilitator kit, plus other percussion, for this event. A fun time was had by all and we saw some of these families return for the closing Playshop community drum circle. 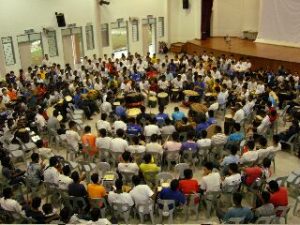 Montfort Boys town houses, feeds and educates children form low-income families, school dropouts and Orphans. The age group ranged from 16 to 18. They receive technical training that prepares them to work in the real world. The training areas included Carpentry, Auto Mechanics, Welding, Machine shop, Computer Maintenance, Graphic Design, etc. This program was a big challenge for me and a lot of fun as well. Although we had 360 participants, there would be only enough drums and percussion for about half of the kids. So the school held a home made found sound and percussion making contest and the kids came up with an amazing array of musical junk instruments made from bamboo, tin cans, plastic buckets and, of course, Masking tape. They also had three drumming troupes representing the three major cultural populations in the Boys Town. One was An Indian drumming troupe of 10 drummers with an assortment of drums from South India. The Maiiem drum was the biggest Indian drum; a double-headed drum played with a thin stick on one side and mettle ringed fingers on the other. There was a second troupe of Compang drummers, the traditional Malay drum, consisting of about 12 Malay boys and the third troupe were 4 Chinese Loin drummers with huge tack head lion drums. (Think Tiko Drums on their sides).

Facilitating this much teenage energy put me to the test as they all kept falling into the "Foot Ball rhythm" as one group. I solved the challenge by show casing each of the three drumming troupes to start different rhythms. Then the grooves got good and funky. A wise elf once told me "Use what they give you." It works.

Using the criteria of, 1, showing spirit, 2, full participation and, 3, ingenuity in their playing, I selected some participants from the 360 Boys town kids (one of them a girl) to participate in the Facilitator training at no cost. All the kids that were selected were attentive, well behaved, interacted well with the adults and participated fully in the training. Montfort Boys town is going to invest in one or two REMO/Arthur Hull Facilitator kits and have the kids, who attended the VMC Fac program, facilitate circles regularly at the school.

The program was full of beginning beginner drummers, so we did a drum class and worked the "Musicality" exercises extra hard. I emphasized that they needed to take some drum classes from one, or all, of the four hand drum teachers that were in the program so as to get an overview of the "Universal principles of hand drumming".

It also helped that we had 3 Hawaii graduates and one East Coast 6-day graduate in the program. My heart-felt thanks goes out to these guys for being such great models for the beginner beginners at the program. Paul Lau, Edwin Nathaniel, John Hagedorn and Syed Ibrahim, (who came up to Kuala Lumpur from Singapore), all went out of their way to make this program go smoothly for the participants and for me.

This VMC Facilitator Playshop went so well that we had time to do a one and a half hour "Late Night Session," ("No Stinken Facilitators") at the end of Saturday evening. With a Late Night session the group could experience "Transition Points." It was very informative and

Fun. I regret that we were not able to create some late Nighttime in all the other Programs on this tour. Only the Norway training got a "real" late night session.

The professional corporate population of this circle was so high that I had a lunchtime corporate round table discussion on how to transfer and adapt the drum circle facilitation techniques to meet the demands of a business message delivery format.

36 Participants
Drum Circle Facilitators; the 4 VMC graduates mentioned above.
Drum Teachers 4
Music Teachers 2, (One from Shanghai. That makes one participant from Shanghai attending each of the last four Asian VMC FAC programs)
School Teachers 2
Kids at Risk councilors 2
Special Needs Servers 8
Corporate Trainers 10
Corporate Human Resource facilitators 2
Personal Growth facilitator 1
Religious facilitator 1
Newspaper writers 2, (From the Star Journal)
And 2 people from Non-Profit support organizations
As in other South East Asian programs I discovered that out of the 36
Participants only a small minority, 7, considered themselves recreational drummers. This demographic will change dramatically in the next 2 years if I have any thing to do with it.

With the two radio shows and the three News articles, the drum circle was well advertised and well attended. About 150 participants total. We did the usual "Arthur does drum call, then we do controlled jump time." That format works well in Asia. Most of the members of Edwin's band show up, as did some of his students. But by the end of the circle the veteran players had all clumped together in one section of the circle. So for the finale finally I showcased the quarter section of hotshot players and then did a series of switchbacks between them and the rest of the circle. In between switchbacks I went over to Edwin and said " Three players to each one of you. That’s about the right odds." Edwin laughed so hard he lost his rhythm. The modulated switchbacks sounded great and energized the circle into the last groove of the night.

After completing this years world tour facilitators trainings, there are now a lot more new drum circle facilitators in the world. I have now collected more strings and ribbons for this year’s tour ball. I will take it home and merge it with the mother ball of string that sits on my desk in my studio in Santa Cruz California. With over 2500 VMC Facilitator playshop graduates contributing strings to the mother ball, it is getting so big we may have to put it in its own box to send it to the next Hawaii Playshop.

My thanks goes out to all the local promoter, producers and organizers in all the countries that I have been privileged to visit on this tour. With out their support and advocacy this project would have been impossible to accomplish.

Added thanks goes out to John Fitzgerald and REMO. With their help and sponsorship. Through all the regional REMO distributers we were able to keep the cost to the Playshop participants to a minimum. 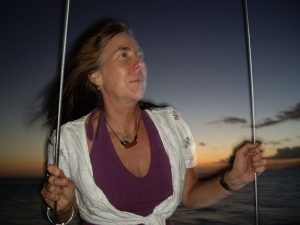 And last but not least, my heart felt thanks goes out to Diana Hull who spent a large part of her year setting up and coordinating this tour with all of it's different cultural and logistical challenges.

Although this tour was a good excuse for us to get me out of the house so Diana could write her thesis for her master’s degree, After 3 months on the road, she missed me enough to let me come home.

That's all for now!