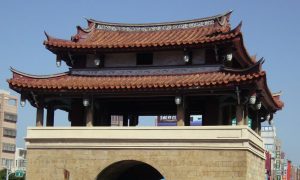 The Site of our Community Circle

My first program in Taipei was in 97, almost 10 years ago. Ted Lyn was my translator back then, as he was for this program. I understand that during my last visit I ran through two translators before they could find one that could keep up with me. They were much too Chinese, (Asian), to tell me that I should talk slower or speak in smaller translatable chunks. That was before Kaoru, from Japan, trained me how to work with translators.

This time they searched for, and found Ted specifically to be this projects translator.

Ted and I met the day before the start of the training and spent an hour going over the material that I was to present. We set up body signals for each other so he could tell me when he had enough information to translate or for me to stop talking so he "could" translate. By doing this with Ted, I could deliver whole chunks of information during the training while Ted, referring to the charts that I brought with me, could translate whole concepts in one go. We cut translation time in half making more room in the training for Jump Time!

The REMO Distributer, KHS, had gathered over 75 School teachers from all over Republic of China, (Taiwan), for this program. These teachers taught all grade levels from 1st grade to High school. So I designed the training specifically for school formatting and assembly presentation, but I made lots of references to community drum circle facilitation. Also there, were 8 returnees from last years Taipei Facilitators Playshop and one Hawaii Graduate from this year: Ya-Wen Hsiao. Ya-Wen did not speak English well, (Or American), so during Hawaii, I give her some privet time, as I do with all non-English speakers at that program.

I watched Ya-Wen during the training exercises we did here in Taipei. Although young, 25, she was confidant and always took the exercise one step further. I thought that she would be a great model for a drum call for facilitation and a critique. She was surprised and honored when I ask, but immediately came back to me and asked me that, if I was to give her a public critique, could I giver her specific parameters and tasks. I told her that she did not have to do a "Real" drum call. I said that she had 15 minutes to run through any part of the "Anatomy of a drum circle" Map that she wanted to experiment with.

(I need to keep telling myself to be careful as what you say to Asians, as they will take what you say literally.)

Ya-Wen took me literately and did a drum call that was a perfect demonstration of the four facilitator's job descriptions as it progresses through the whole "MAP” She started with Dictator, teaching the facilitators body language by using full group interventions. She moved on to Director as she did Teaching-without-Teaching by sculpting full timbers for showcasing and education of the group about the instrument make up of the drum circle. She became the Facilitator when she sculpted a drum song platform and did call and response with the rest of the circle. Finally she played the part of the Orchestra Conductor, sculpting the inner circle for call and response while having the two outer circles continue to play. But what blew me away was when Ya-Wen brought the circle to an exciting closing by "switching" the rhythm back and forth between the inner and outer circles, (AKA Shakerman); She modulated the "switch sequence" to a climatic full rumble closing. The usually quite polite and subdued group of Chinese schoolteachers roared in applause and vocal expression of their thanks. 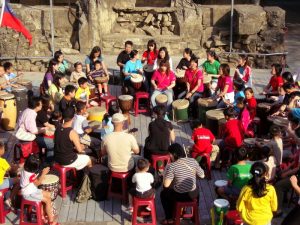 I could not have done it any better myself. So I went to the middle of the circle and did a three-point floor bow to Ya-Wen in acknowledgment of her masterful work. She fell to the floor laughing and crying at the same time. I asked her to come to the Drum circle the next day and co-facilitate with me. She did.

The City of Chin Chou is close to the ocean on the island of Taiwan, about one hours drive from Taipei. Although the event was situated in the middle of the city, in the middle of a huge traffic circle Roundabout, we were actually placed in the bottom of a cement sound bowl so the traffic noise did not interfere with the drum circle song. Although the population consisted mostly of families with small kids, we had a bunch of teenagers that were hanging out in the underground pedestrian walkway that intersected at the roundabout. They were attracted to the circle's energy and joined us. There was also a group of players who came from Taipei specifically for the drum circle event. They were sent to the event by Sharon Wan, Hand drum teacher and Hawaii graduate. Ya-Wen and I shared the facilitation duties equally at this circle. Because nether of us spoke much of each other’s language, Eye contact and body signals were our communication devices. We did well and so did the circle. 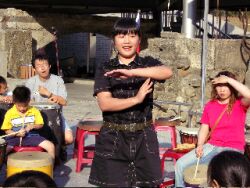 I did drum call with this mixed family group drum circle and then pretty much handed the circle over to Ya-Wen stepping in occasionally to make a small adjustment in a groove or the group energy and to do the closing. Ya-Wen not only GOOWed but she STOOWed, letting the group develop their drum groove and respecting the transition points in the music. Her GOOW spot was a seat in the center row, and she played the djembe very well to help support the groove. (She is a 3rd year Percussion Student and the Taipei University of Music).

With a heavy kid populated drum event, we were confronted with the dreaded "Football Rhythm" virus that attacks Asian drum circles from time to time. This is where every one in the circle falls into playing the Da, Da, DaDaDa football cheer rhythm. Once it is established it takes some work on the facilitators’ part to break the group’s habit of falling into that particular rhythm trap.

Ya-Wen solved the problem by bringing the Football Rhythm to a close and initiating the "1 to 8" rhythm game. By having every one pick out and play one note in an eight count, Ya-Wen set up a rhythmical platform for interactive rhythm dialog amongst the players. A wonderful drum song emerged from the game that allowed Ya-Wen to sit down and play with the group for 5 minutes before the next transition point came up. If I had tried that game, the directions would have been "Lost in Translation" and would have been a messy start. I was impressed with Ya-Wen and so was Jane, the REMO disrupter representative that sponsored this event. After the program Jane had a long talk with Ya-Wen, and I am sure she will be facilitating regularly in Taipei soon. A great time was had by all.