By the time I got to Scotland at the end of this one year Playshop tour, fall had fully fell at our beloved Wiston hunting lodge. With two successive frosts occurring in a week, the leaves were falling like rain whenever the wind blew. The dirt road that leads up to the old stable house behind the lodge was a blanket of Rusty reds, burnt orange and a hundred shades of gold and brown. But as you can tell by this picture, we had quite a few days of sun as well. 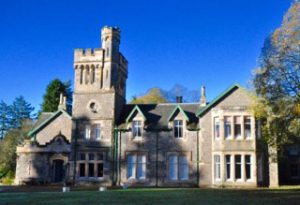 The 65 people from 17 countries had completed their Playshop and had gone home. And my 16 elder-in-training protégées from 11 countries had a full day’s rest in-between the end of the Playshop and the beginning of the first Train-The-Trainer program. I am sure that the TTT program will be marked as a major transformational moment in VMC history.

So far, I have taught 12,000+ people how to facilitate rhythm-based events over many years. But until this year, I have not taught anyone how to teach a 3-day Village Music Circles facilitator training program.

This moment has been a long time coming for me and for our community. In actuality, the Training The Trainer (TTT) processes started 10 years ago. Back then, I looked for, and picked out certain VMC TTT candidates from our population of international drum circle facilitator graduates. I watched and monitored these people for years to see if they met what were my requirements to represent Village Music Circles and it’s values.

Here is the process of TTT development that we have been going through to get to this point.

Twenty-seven years ago, in 1990, Cameron Tummel took all my drum classes when I was teaching at the University of California Santa Cruz. As my apprentice, Cameron studied and played with me until he ended up teaching those same classes for me as I started traveling nationally and then internationally. He apprenticed with me, followed me around to many of my rhythm events of all kinds, and eventually earned his place working for Village Music Circles as one of our corporate facilitators. This happened way before this community was aware that there was such a thing as a corporate drum circle. Over the last two decades since then, his experience with me led him to facilitate rhythm events and trainings all over the world. He is now our current DCFG president.

Although John Fitzgerald and I were already acquainted through our relationship with the REMO drum company, it was in 2005 that John accompanied me on a REMO Asian DrumAbout tour. I did drum circle “Demonstrations” and one-day “Introductions” to drum circle facilitation in Korea, Japan, Taiwan and Hong Kong. Of course I threw John into those circles as a facilitator and he hasn’t stopped since. John escorted me, and co-facilitated DCs on many of the early REMO drum circle demonstration tours. He is now in charge of REMO Recreational Drumming. He is in charge of “Connecting The Recreational Drumming Dots” all around the world. I can honestly say that John and REMO are two of the reasons that we are now enjoying such a healthy international recreational drumming community. But separate from that, he is a respected elder in our community. John headed up our one-day introduction curriculum development committee for the TTT team.

In the year 2000, Cameron did a corporate team building event in Texas, when he was still working for VMC. Jim Boneau was a corporate trainer for that company and Cameron told him about the Hawaii Playshop happening two weeks later. Jim had never drummed before that team building event, but was so inspired by the experience that he decided to go to the Playshop. Jim showed up and has been to every Hawaii Playshop since, except one. After taking his first Mentor program, he advised and mentored me in how to improve the program. As a result of that, Jim has been my training partner every since. Jim is now the lead Trainer for the VMC Mentor programs that we do all over the world. He was also my training partner in the Train The Trainer program that we have now completed with our international VMC DCFacilitators Training team. Jim co-authored the new Playshop Workbook with me and led the first 3-day Playshop that kicked off this TTT process in 2016.

Paul Dear and I met at a drum circle at the Corn Exchange in Leeds England in 1999, organized by Ianto Thornber (who, I am sorry to say, has sadly just passed away).  Paul “had a ‘moment’ at that event that was a life-changing experience for him. His drummer’s ego was “surgically removed” (read his VMC DCFacilitators certification essay on the VMC website). Over the next two years he attended the Hawaii Playshop and the Mentor program where he met both Cameron and Jim. After he got his butt kicked, Paul went out in the world to ‘work with the kids’ and build community.

In 2009, after attending many of the 3-day UK Playshops, he became program director for the VMC UK Playshops and a VMC-Certified Facilitator. In 2015 during one of his “DrumTreks” he traveled 3500 miles and did 36 drum circles in 26 towns/cities in 26 days raising £8000 for charity along the way. That’s who he is.

At last years UK Playshop, Paul that suggested Wiston be the venue for the TTT Training program, being as it was the last leg of the 2017 tour. By doing so, Paul had unknowing volunteered to be Project Manager for the TTT program. Not only did Paul get all the TTT’ers to Scotland, but he co-facilitated with Dr. Jane Bentley the last 3-day (really 4-day) Playshop of this years long TTT tour. Then he got one days rest before facilitating the logistics of our TTT Certification meeting.

The four people listed above are part of the International VMC Trainer support team. America and “The Americas” TTT project is 2 years behind this international TTT program. Just a warning, the same process is being applied in the US at this moment. I am watching you!!!

Paul, Cameron, John and Jim’s Village Music Circles relationship resumes are examples of the depth of the work that they have done with VMC to become a part of this international group of VMC Trainers. The same goes for each of the 16 members of this extraordinary team of VMC-Certified Facilitator Trainers.

They were already saplings when I first met them doing their own versions of rhythm evangelism. Over the years with their passion for learning and for serving through rhythm, they have grown up to be elder trees in an international community that they helped to build in many countries around the world.

To get their training certification, the people whom are listed below, did not just take a 3-day Train The Trainer program with me. They showed up a long time ago.

As you can see by the mentoring process that we have gone through, they have been a part of a 10-year initiation to get to this point. In other words, they all have paid their dues. With the deepest respect and as a proud uncle, I present to you the next generation of Village Music Circles Certified 3-day Playshop Trainers (coming to a Playshop training near you!).

These people have my full respect, backing and support. I stand beside them as they join the Village Music Circles DCFacilitator Training Team.

I trust that the international community that they helped to build, will respect their position as a VMC Trainer and support them as they begin to facilitate their Playshop trainings in their respective countries.

Speaking about support. From my view point, it is obvious that we as DCFacilitators, would not have been as successful on our Rhythmical Evangelical Mission as we are today without the valued direct and indirect support of Remo D. Belli and REMO Incorporated itself. You all have read my reports as I travel the world with REMO’s help. In this report I can let you know that upon their graduation from the VMC DCFacilitators Training, each person, whether they were affiliated with the company or not, received $500 from REMO to help defray the cost of their training. No questions or quid-pro-quo asked. REMO literally “Paid It Forward”….

Last year there was one person teaching the VMC DCFacilitation Playshops around the world. Next year there will be 17 of us. Now I am not alone.

As far as drum circle facilitation trainings go, as they say in Japan that if “Arthur is the tree” then we have just planted 16 more VMC Training trees.

Life is a dance   Arthur