After Germany &
before Scotland 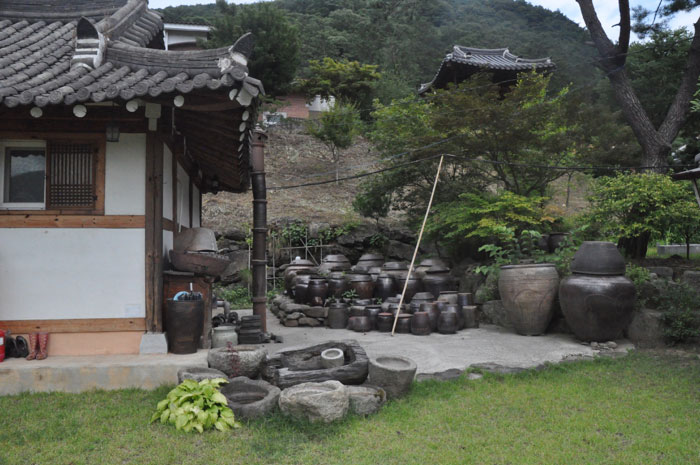 We did our Playshop at the Pibong Cultural Village. This village is situated in the foothills near the Southern city of Jeonju in the heart of the Korean peninsula. 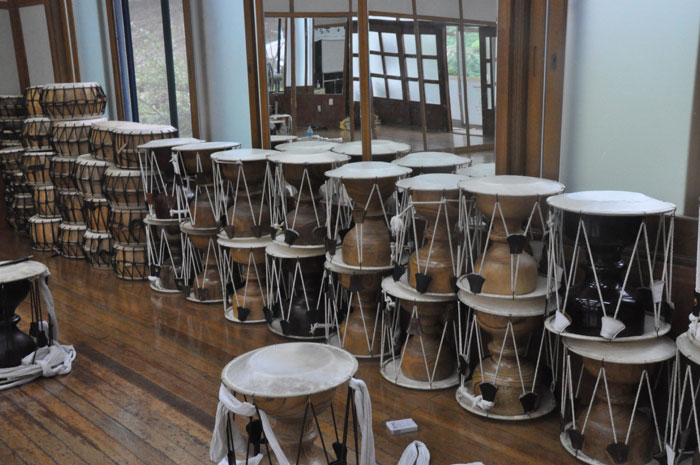 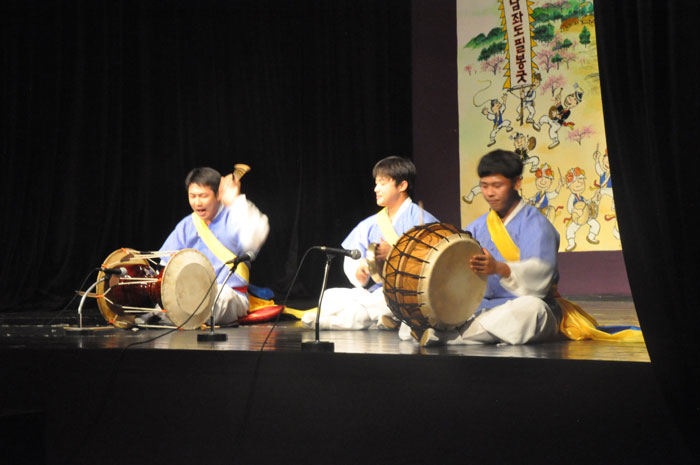 The instrument from the Samulnori ensemble are, from left to right:
The Jang Gu, Pronounced ‘Chango,' looks like a massive talking drum with two very different sounds. Played with two different sticks on both heads (a long bamboo chopstick like stick and a heavier mallet—a cow hide skin on one side and a horse hide skin on the other). The drum has a very special sound that can’t be mistaken for any other type of drum that I’ve heard on my travels around the globe.

The Jang Gu player in this picture is Chon He, whom I befriended after the first performance that was presented to us. He is an Academy teacher who is an apprentice to the head teacher, Jin-sung Yang, who has been officially designated by the Korean government as an “Intangible Cultural Asset.” Our Community Drum circle had a number of students and teachers of the Traditional Academy, including Chon He. It rocked.

The Kkwaeng-gwali, sometimes call the Gwali, is a small, but LOUD, hand held gong hit with a bamboo mallet. The gong is held in such a way that you can control the length of the note with the fingers of the holding hand that are in the inside ridge of the gong. The person playing the Kkwaeng-gwali is the conductor of the ensemble.

Song from KDRS (Korean Drum Circle Research Society), gave me a Kkwaeng-gwali Gong last year. It’s in my 'Man Cave.’ I have to wear ear plugs to practice it.

The Buk is the shortest, stubbiest double headed Jun-Jun like instrument that I’ve ever seen. Rope strung from head to head with hooks, at first like a Mali weave for tuning. They have a very deep sound for such small heads and bodies (about 13 inches in diameter and height). It is played with one stick on one side and a hand on the other.

The Jing Gong is not shown in this picture. The Jing is the larger gong of this four instrument ensemble. It is not large compared to Indonesian Gongs. It is 13 inches in diameter at the most, hit with a fat soft mallet and is hung from a small bamboo stand for stage performances and carried, as with the rest of the instrumental ensemble when being played in a festival celebration. It is small enough to be carried when the ensemble moves while playing in the festival parades. 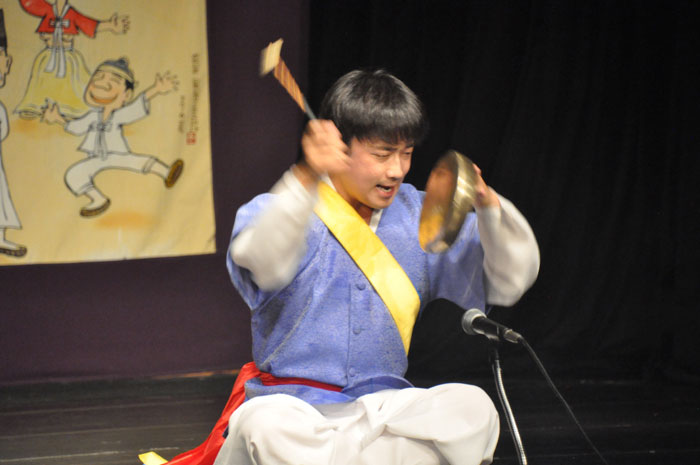 On the second Playshop day we set aside some time from the training and received a traditional drum lesson with the Jang Gu and Buk Drums. I was the only one playing the Gwali Gong except the teacher. So I got to practice my Kkwaeng-gwali Gong chops with a real teacher rather than a video. 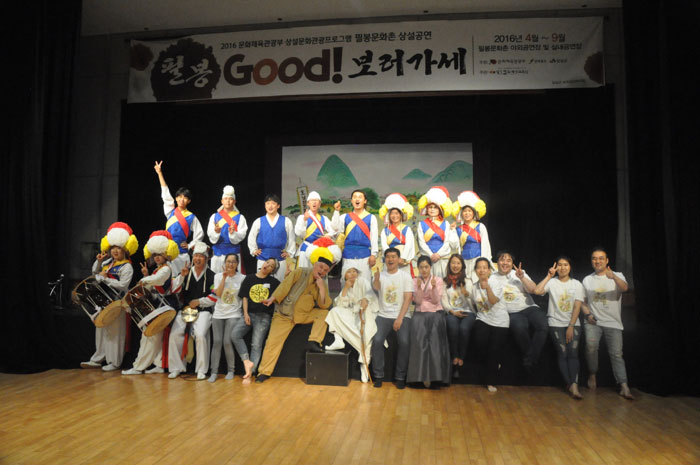 The next three photos are from the first performance that the
Traditional Music Academy gave us. 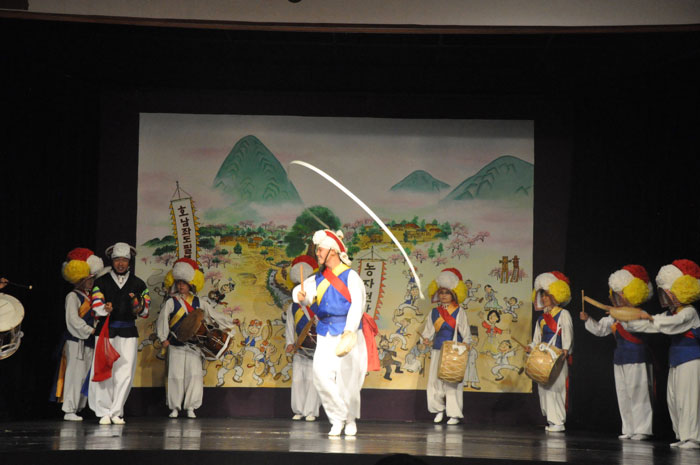 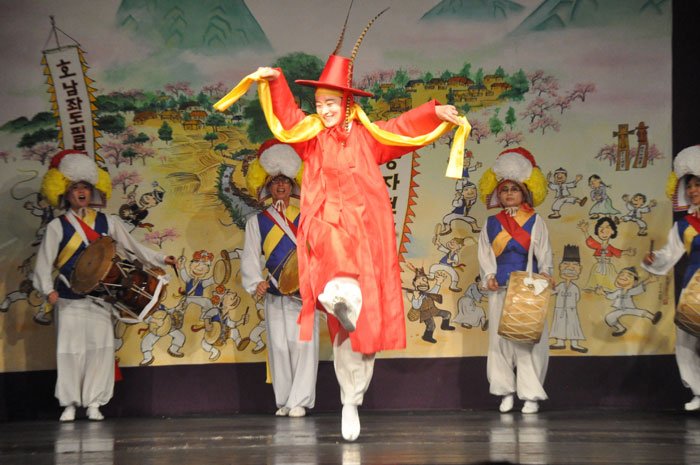 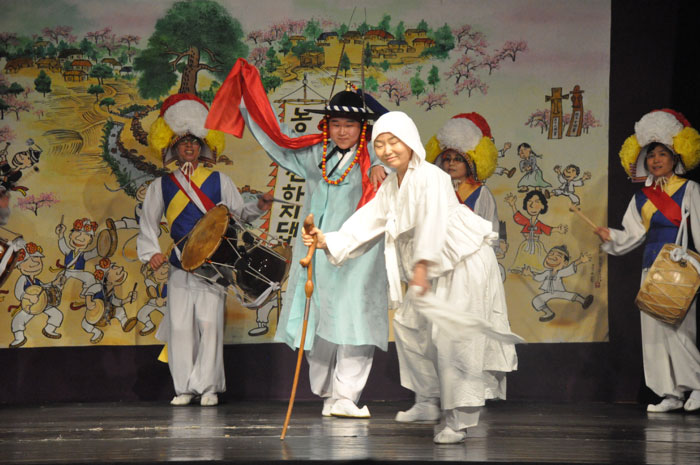 That is a nice shot of a Jang Gu drum in the back ground.
It’s the black one that looks like an oversized talking drum. 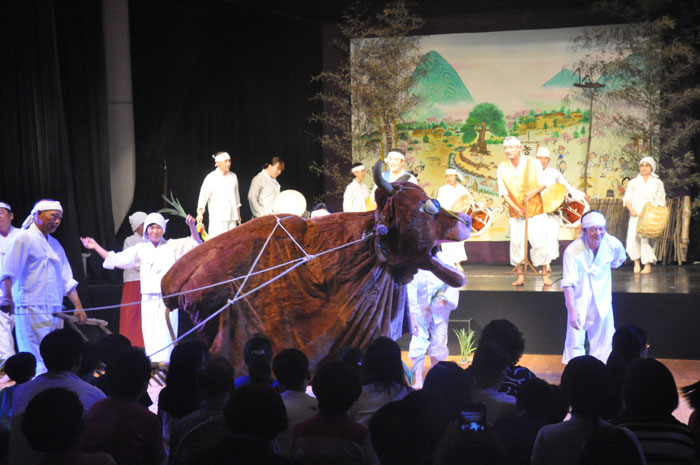 On the evening of third day of our Korea Playshop training, they held a whole different kind of a concert for us that was really a musical play based on the history of the Pibong Village life. It had a simple plot with the traditional music wrapped around and through it.

The plot was about the village and its struggles in the transitional period in the late 60s and early 70s, as the traditional village and its people struggle to adapt to the modernization of their culture. The play was not unlike a Japanese Kabuki Theater play with lots of community song and dance.

They used the floor at the front of the stage to plant a fake crop of rice and used a cow costume (2 people inside) to pull a water rice plow. They brought in elderly people from a nearby village to act in the play. 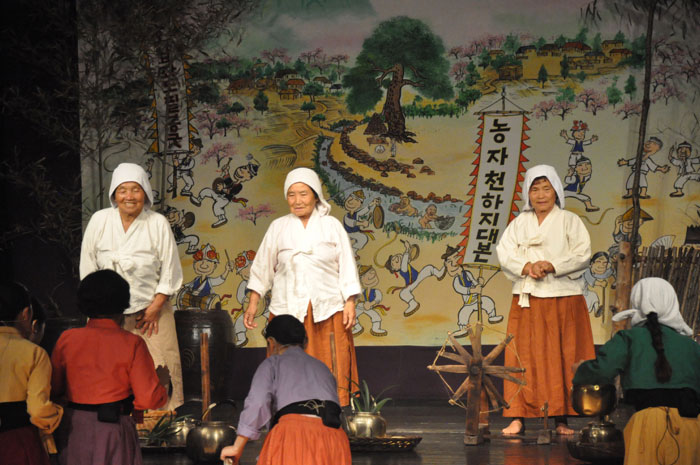 The elderly women did the spinning and weaving and the old men did the farming and harvesting. From our playshop practice room, I could see the village, where they came from, sitting on the other side of the valley, nestled in the misty woods. 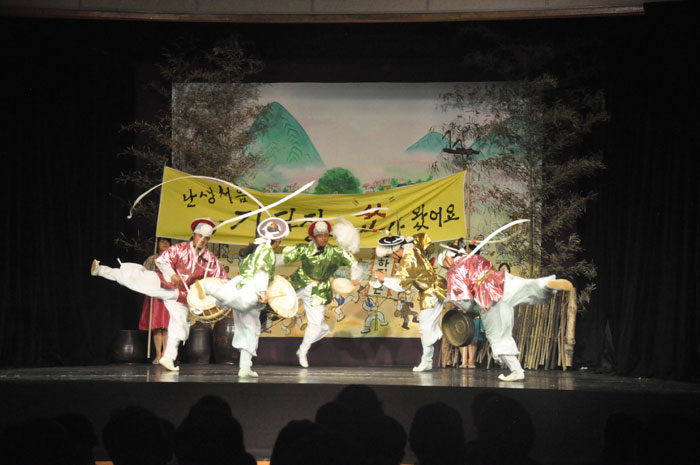 The majority of the time, the musicians were seated with the audience on the auditorium floor,
off to the side.

But every once and awhile, and especially at the closing finale, the musicians moved around with the actors and audience.

One of the musicians in the play ensemble was a horn player, named Lee In-Yuab, who played a long bodied wind instrument called a “Tae Pyeeugso.” Lee could make the Tae Pyeeugso scream louder than all the 20+ drums and gongs in the festival ensemble combined. And he could also make it moan softly and sweetly in the play’s sad death scene and burial parade. Along with every one else, I cried.

In the picture above, you can see Mr. Lee in front of the “Hero’s Parade” playing his long Tae Pyeeugso horn.

I wanted to meet Mr. Lee after the play, to thank him for his musical mastery, but he disappeared in the chaos after the closing community dance finale. I would get to have a surprise meeting with Mr. Lee later (to be continued).

After the Playshop, Song took me to the city of Jeonju for my “Culture Day” experience that is a part of all my Playshop visits to any country.

Check it out here.