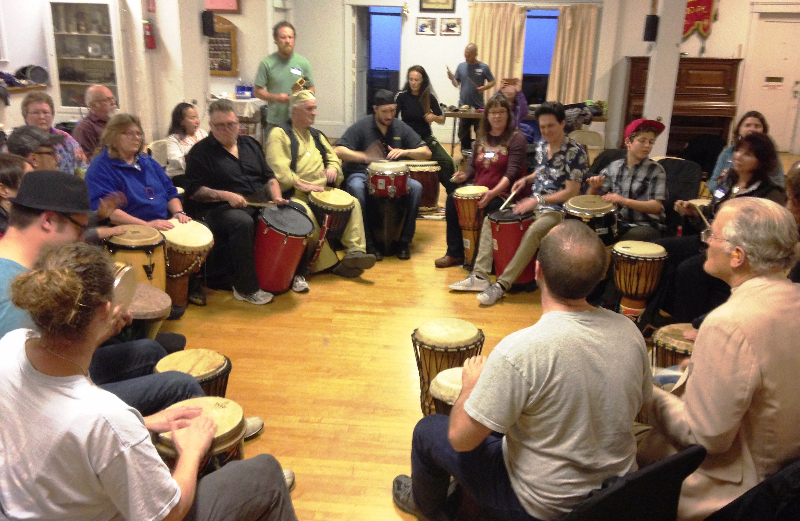 This is the story of the amazing Late Night Jam that happened at the 2016 San Francisco Bay Facilitators Playshop.  First, let me give you some back story.

Pete Escovedo is a legendary percussionist who, many years ago, broke down the barriers between jazz, salsa, Latin jazz and contemporary music. This was a little before Babatunde Olatunji introduced the African beat to American jazz.

When I was 13, I listened to a one-hour radio jazz show out of Salt Lake City, Utah on my “ham radio” every night before I went to sleep. I heard Pete’s signature timbale and conga sounds on Cal Tjader’s music.  It was the beginning of “Latin Jazz” as we know it.

With 9 kids from 3 marriages growing up under his musical tutelage, Pete had a ready-made band called “E Family”, with some his kids, Sheila, Juan and Peter Michael performing in it.

Yes, that Sheila E, one of Pete’s daughters.  I met her in the 90s while working with Micky Hart and his SF Bay Area superstar buddies, Santana, Airto Moreira, Flora Purim, Zakir Hussein and Hamza El Din on the first “world’s biggest drum circle” that we hosted in Marin. Sheila told me that her drumming style was so unique because she use to sit in front of (opposite) her father while he taught his boys all lined up on congas facing her.

Juan Escovedo is one of the younger kids in the Escovedo family.  A professional percussionist in his own right, he saw one of my books at a friend’s house and inquired about it. She told him that the author was holding a drum circle facilitators training in Vallejo two weeks from then and that she was attending. Juan borrowed the book, read it returning it in two days and then singed up for the playshop.

It was an honor to have him attend. He used his great drumming and musical skills appropriately in just the right amount throughout the Playshop, and was a great contributor to our process.

On Saturday night of the Playshop, we hold a public-accessible “Late Night” session.  We added this non-facilitated “Free-From” drum circle as a key part of the training.  Late Night is where people experience 1) what natural Transition Points sound and feel like when they arise organically in the music and 2) the magic of in-the-moment music-making that is possible as we develop higher levels of group consciousness and musical connection.

Our invitations received a great response from the community.  As guests arrived, I noticed quite a few people with congas in their hands.  Most unusual.  Juan Escovedo had invited a whole bevy of players from the San Francisco bay Afro-Cuban drumming community.

The guests joined our circle, and I announced the Late Night rules, which are almost no rules:

I suggested that Late Night is about deep listening, while looking for and supporting group agreement, all while sharing your rhythmical spirit with the playing group.

Then I addressed Juan’s friends. “Congeros”, I said “ We love soloing, but I ask that you share the solo space and offer us Short Blasts of Grace and Beauty.”

“Also”, I continued, “We want to create an in-the-moment rhythmical experience.  So I would ask you not to play anything that you already know.”

A couple of congeros did a double take and laughed when they realized that I was asking them not to play any Cuban Rumba Guaguancó or other traditional rhythms. What I was really saying was, “Don’t Play Your Playlist, Play Your Spirit.”

And so the Late Night groove began

Two of the old school congeros, (50 to 60 years old) sat in the back of the circle. When I offered them some drums they politely declined, saying they were attending “Just to observe”.

It was obvious that these guys were skeptical of what was about to happen. I wondered what Juan said that got them curious enough to come and endure what they thought would be a “Hippy Thunder Drum Circle.”

Of course, within 20 minutes, these old guys were right in the thick of it, drumming away.

From the very Get-Go, everyone jumped into the fray

As usual, in the beginning of a Late Night, everyone was in Full Tilt Boogie drumming mode = loud and fast.  Once we get our “Ya Ya’s” out of our system, we usually calm down and get into some deeper grooving.

But tonight was different.  The Congeros would jump on every rhythm variation and explore it fully with gusto.  Released from the confines of pre-designated PARTS, they could fully improvise their rhythms at the slightest whim.

No Rules!! YEA!! They were like kids in a candy store tasting everything, AT FULL YA YA volume and speed.

The rhythm evolved in a flowing game of musical chairs, as people got up, moved around, and took up different instruments.

They couldn’t stop. Although there were great dynamic transition points in the rhythms in the music, the Congeros wouldn’t, or couldn’t, let the rhythm slow down, fade away or just plain stop. The groove was sustained from 7:30 all the way to 9 PM. I loved it.

Eventually, we got down to a decent slow, soft and deep, “We’ve got nowhere to go because we are already there” Trance Groove to finish off the night. A big Ahhhh for everyone.

Most of our Late Night players did not know it, but this amazing mix of experienced Afro-Cuban players coming together and sharing their in-the-moment rhythmical spirit was a very rare thing indeed.

At one point during the late night session, I overheard one of the congeros talking to a VMC Challenge Graduate. “This is so great to have so many good players in a free-form circle who know how to listen. Where can I find this kind of circle again?”

The graduate replied, “On the North shore of island of Oahu, Hawaii in the beginning of August.”

Thank you Juan and the gaggle of Congeros who joined us for an amazing in-the-moment experience!

Life is a dance, 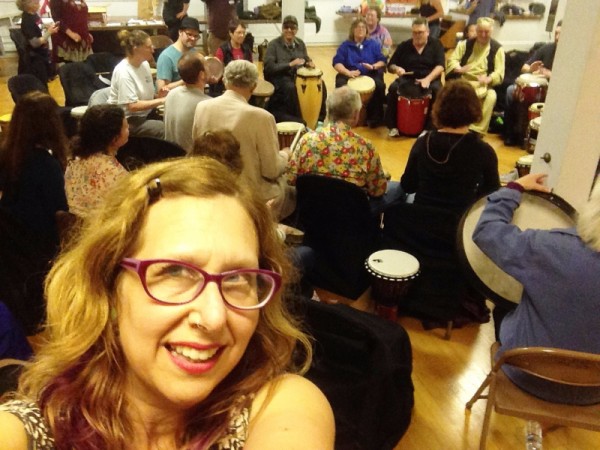 Jeni Swerdlow of Drummm Rhythmic Events did a fantastic job of organizing the Bay Area Facilitators Playshop, and inviting her community for the Saturday Late Night and Sunday Family Drum Circles.  Thanks, Jeni!