What are the Big Drums called? (Bumbershoot)

Weeks after the glow of Bumbershoot in Seattle has passed, I am compelled to help my fellow DCF’s grasp what’s so cool about the party. For those that haven’t been, I hope this helps, for those that have, add a few pennies to my two cents…

Officially, Bumbershoot is the largest music festival in the Northwest drawing one-quarter million people to a dozen stages, performance art, films,  – you name it – over four days.  That’s cool, but not unique.

You’ve heard about the rolling transient circles of 100 to 300 people – mostly newbies -10 hours per day. Add the rare, Hawaii- like treat of having so many fellow DCF’s hanging around. Then there are a slew of volunteers that handle all the security and miscellaneous stuff – familiar faces all. Let’s see, our very own backstage set-up that features Arthur on his laptop scribing real-time for his book and doling out his sageness. Endless beverages, snacks, AND an executive bathroom. It’s a regular DCF clubhouse I tell ya. (Nice job Ed McNichol – club director).

Cushy. Nice. Now check this out. 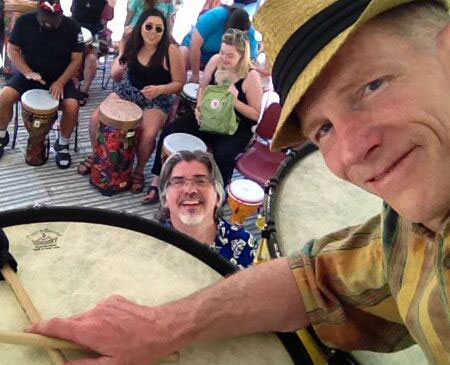 Back when Remo was pushing hard for mind share they worked out a deal with the promoters of Bumbershoot and built a huge 7 drum-in-the-round showcase for the Rhythm Equator Stage (the official name). The largest drum has a four-foot head, and the smallest is 18 inches. To play, one stands in a bucket 8 feet off the ground, surrounded by these drums. You climb a regular size ladder and then climb in. There’s room for two people, and it sits center stage just behind the DCF microphone. So that’s the physical description.

The impact upon the event is even more daunting. These are the biggest voice in the orchestra by a factor of 10 times. And, we control the bucket. Note: DCF support on the biggest voice. That’s how I spell mmmmmmm mmmmm goood.

The dynamics of the Big Drums pose a challenge for both the player(s) and the facilitator. Some play them soft, some play aggressively, most play them well. The sound is so deep from these puppies you need to play well ahead of the pulse to meet the downbeat everyone else hears.

The Big Drums are a giant, friendly plate to spin. They can mesmerize the crowd; mend transition points; generate student (and facilitator) crisis mode in a heartbeat; be a non-factor if played too gently; and serve a first class ego-trip if played without the blessings of the groove. 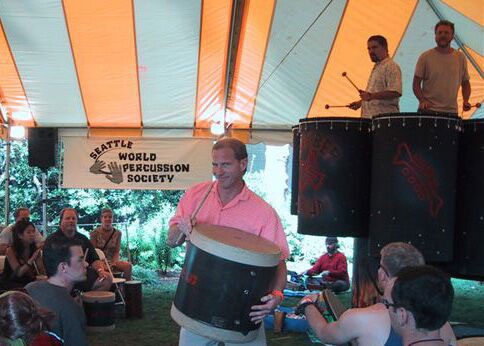 Played with respectful abandon in the heat of a hooked-up groove they are an inspiration; a catalyst of love; a magnetic force to be played with; a spark of the highest order. You know the feeling, when the group is locked-in, and then someone or thing pushes the state of groove to the next level, the rarified space, where it is difficult to stay because it is sssooo excellent.

And those Big Drums – whatever they are called.