My dear friend, Bill Muench, unexpectedly died this week of a pituitary tumor. He didn’t recover from the surgery. He was an important part of our VMC family. He served our community through supporting our technology, but he was a lot more than that.

35 years ago when the concept of an internationally connected recreational rhythms-culture was just a wishful gleam in my eye, I was beginning to put together the first Drum Circle book. I gathered together a family of professionals. These were people connected through my Village Music classes up at the University of California in Santa Cruz, on it’s beach near the lighthouse, or the village dance community downtown. Many of this team of old friends still works with me today. 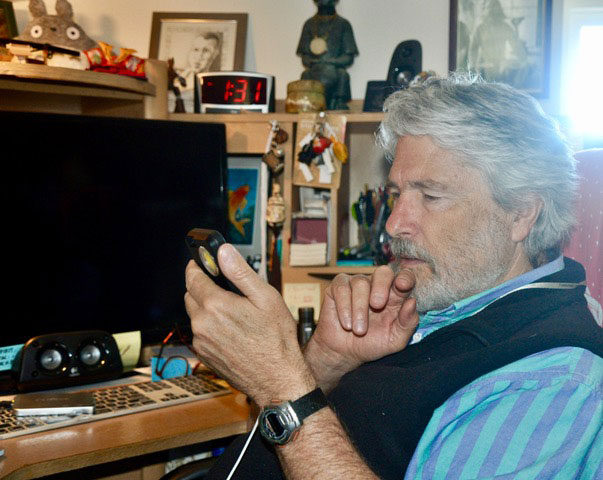 An important part of this team was my friend of 35 years – Bill Muench, we all called him Bee.

You might have met him at a Hawaii Playshop.

Bee was a mild mannered, deep thinking, computer wizard who escaped Silicon Valley and bought a modest home in the foothills of the Santa Cruz coastal mountains.

Bee would rather bike thru the redwoods into town, than drive.

We drummed and played Shona marimbas together for years.

Bee was exclusive about who he chose for his computer clients; Diana and I were privileged to be accepted into that small group. We didn’t choose him. He did not need the work. He chose us and made house calls. Bee’s personal relationships were generated by deep connections with the people he was serving during his house calls.

He also provided an interesting community service work. Anyone could bring their computer to India Joe’s restaurant on Wednesday afternoons and find Bee sitting at a back table waiting to help them – free of charge.

When Bee came to the house, the VMC office, or to my man-cave to fix, adjust or install something, he would always teach me one new computer trick. He made my troubled relationship with computers a little easier.

Every book I have written has Bee’s fingerprints all over it. He always asked the right questions, deepening our conversations and creating new realizations.

The day after his surgery, Bee lay in a coma in the hospital ready to leave his body, as friends and family came to say goodbye. After Bee’s sister, met with the doctor, they determined to remove his life support system at 8PM that evening. Diana and I arrived early that day and stayed with Bee to the end. She held his heart and I massaged his feet as he passed away.

Even now as I continue to write, Bee is sitting on my shoulder, right next to Baba.