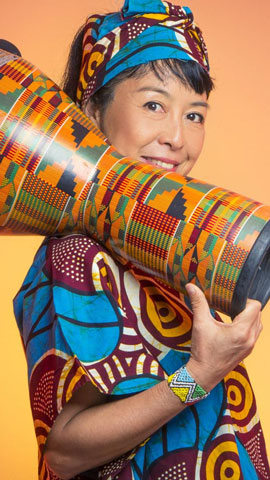 Internationally acclaimed Japanese percussionist Kumi Masunaga is a REMO artist and founder of Drum Jam, based in Hong Kong. She has traveled from Africa to the Americas to Asia, learning rhythms to ignite her team-building programs. She has shared the stage with leading change-makers and wellness leaders including Jane Goodall, David Beckham, Shiva Rea and Dave Stringer.

For over twenty years, tens of thousands of people have experienced her corporate team building, classrooms, parties and wellness retreats. She is trained in the evidence-based HealthRHYTHMS, and is a certified Music Medicine Facilitator, Rhythm2Recovery Facilitator, and Village Msuic Circles trainer. In response to the COVID pandemic, she is now offering online drum programs for communities and individuals.

What inspired you to become a Certified Drum Circle Facilitator? I was inspired by Arthur Hull, how he empowers individuals and helps build communities.

I have huge respect for Arthur who has dedicated his life to teaching the art and science of contemporary drum circle facilitation to tens of thousands of people around the world. To many, including myself, his trainings have been life-changing.

I was on my own ‘rhythmaculture’ journey in the early 1990s after moving from Tokyo to a small island in Hong Kong called Lamma Island. Unlike the jam-packed and dense cityside, Lamma was made up only of rural fishing villages and jungles. Hearing about this last ‘paradise’ of the then-British colony, many expats flocked there and created an alternative community.

Drum circles in Hong Kong began organically in 1991 in and around a large teepee my boyfriend had built. The style was similar to what Arthur described as “Thunder drum circles” in his book Drum Circle Spirit. We were pulled into the power, mystery, and altered state of consciousness offered to us by the drum.

With the smell of the bonfire burning in the center of our teepee, our drumbeats went on through many late nights. At the top of the teepee was an opening flap where smoke from the bonfire would exit. Whenever the wind’s direction suddenly changed, smoke would fill the teepee and none of us could keep our eyes open. In those moments, our drumbeats, rather than ceasing, intensified. Indescribable vibrations took us like a tornado. Our teepee, glowing orange from the bonfire, looked and felt as if it was going to take off. We lived for these ecstatic moments where we felt so alive and connected.

Word of mouth travelled quickly and we began to gain recognition from other artists. In 1993, we were invited to a festival in Japan, organized by a famous taiko group KODO, called The Earth Celebration, which was one of the world’s few drum-focused outdoor festivals at the time. Our teepee drum circle was a big hit! The festival organizer thanked us for adding a new element of interactive participation to the festival, whose audiences, until then, had only been passively watching stage performances rather than taking part in them.

My love for drumming led me to take numerous solo trips to West African countries in the late ‘90s. In the year 2000 in Guinea, I met John Yost, who told me about Arthur and his life-changing experience in Hawaii.

The next year, 2001, was indeed a life-changing year for me. I took the 6-day programme in Hawaii, alongside over 150 people from 11 countries. I was put in a group with Christine Stevens as my mentor, who later signed me up to be the first Remo endorsee in Asia.

The grand finale of my 2001 trip to the US was the Burning Man Festival. It was a wonderful experience, and I enjoyed jamming with some amazing artists such as Jeff McBride and Abbi Spinner from Fire Circle Alchemy. I was carrying my djembe, a gift from my drum teacher in Guinea, in a cool carrycase designed by me. My drum was my identity there, and I took great pride in it.

On the last day of the festival, just before the Man was burnt, I lost my djembe. I was devastated; my newly-affirmed identity had been taken away from me. I was the only sad person in the entire festival because everyone else was celebrating the burning of the Man, which symbolized the letting go of attachment. I walked alone crying aimlessly for quite some time. The strong wind and sandstorms completely disorientated me.

Eventually, I found a gas-fire pipe structure dorm of drumming circle somewhere in the festival. The fire made the place very warm, so for many, clothing was optional. I was so exhausted that I simply squatted down onto the floor, leaning onto a wheel-chaired person naked and painted completely green. I watched the entire drum circle, and noticed, for the first time, the many layers it had. From the center outwards: the core drummers, the support rhythm section, the dancers, the observers… I was at the edge of the most outer circle, feeling very fragile and vulnerable. It was the first time that I wasn’t the center or in the core group, just sitting, listening deeply to the music with my entire being as the circle unfolded without me, nicely. It was a blessing that I gained by losing that drum.

Fast-forwarding the tape (!) for twenty years, thank god, I am still breathing, performing, facilitating and learning from Arthur. After my first Hawaii training in 2001, I participated in, (and organized some of) the 3-day playshop/RAP x 10 times in Hong Kong, Malaysia and Singapore. In 2011, I had a great opportunity to travel with Arthur in post-tsunami Drum About in Japan with my 6-year-old daughter. For over two weeks, working as a translator and assistant to Arthur was a wonderful learning experience.

In the same year 2011, I received Mentorship training in Hawaii and learnt a lot from both Arthur and Jim, as well as my peers including Louis-Daniel, Roberto and Vasundhara. In 2019, I co-facilitated a 3-day with Arthur and got certified, which qualified me to join the TTT in Prescott, Arizona. Now it is the year 2020, I am a happy and proud member of Village Music Circles global trainers’ team.

As a part of VMC family, I enjoy the level of quality, unity and creativities through our exchanges and interactions with Arthur and the rest of the family. They keep inspiring me to be the best version of myself in all areas of my life. I now know that the things we do are actually outside of simply drumming, as the drum is only a tool to spread love, peace and harmony in the world. I am grateful to be certified by my long-term teacher Arthur who is devoted to this mission.