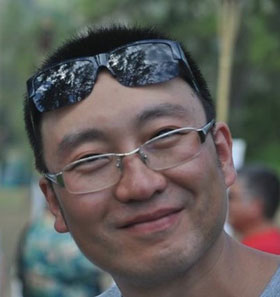 He has been studying Pipa since he was 10 years old and graduated from the Central Conservatory of Music (Beijing, China) in 2001. And then, he has been engaging in Pipa teaching for music performance major in the Conservatory of Minzu University.

In 2014, he participated in Arthur hull's drum guide workshop for the first time in Beijing and was attracted by the drum circle. In the  following six years, he participated in 12 training sessions (3 days and 6 days) which was held by Arthur hull in China. He went to Hawaii for the basic training in 2015 and 2016, and attended the mentor training in 2019. While learning drum circles, he also learned improvisation techniques of music therapy groups and African drums. In Minzu University, he offered rhythm courses and facilitated drum circle events for college students.

In 2013, he created the project "music for college students and special needs population". He served as the instructor, facilitating rhythm activities and drum circles in the project, and committed to helping groups with special needs integrate into society. In 2014, he researched the effect of drum circle on freshmen's adaptation and belonging in the school. In these years, he has been inviting by different associations and conferences, such as "Orff Music Education Professional Committee of China Musicians Association", "China Psychological Association", "China psychological intervention Association", "China Music Therapy Association", "International Conference of Art Psychotherapy in China" and "National Music Education Conference" etc.. Since 2017, he has been working as a drum circle facilitator in the "Beijing University 5.25 college students psychological and Cultural Festival" in Beijing. In 2019, he initiated the "Drum Circle Facilitator of China (DCFC)" and served as the president, which aims to promote Chinese drum circle facilitators to share the rhythm spirit.

Nu's Story: The Drum Circle and I

The life experience of late night

The first experience of drum circle！— Be Curious

In 2013, my wife (Bing) went to the United States attended the American Music Therapy Conference. The agenda of the conference was very compact. Bing was very tired after the whole day’s meeting. But she said she was totally released after playing the drum which conference arranged a drum circle for the attendants, the fatigue disappeared magically. At the same time, she also experienced many positive feelings such as passion, freedom, happiness, etc. Based on this beautiful experience, she bought a lot of books and video materials about the drum circle, and shared them with me. I like rhythm and playing drums very much. Her sharing just aroused my interest and curiosity, "drum circle? What kind of interesting thing is it? (She had bought Arthur’s drum circle spirit book at that time).

2014 is destined to be extraordinary for me. In May of this year, the lovely, lively, humorous and philosophic man-Arthur Hull, brought his child “Drum Circle” to China and hold a three-day training workshop for us. I am lucky to participate this workshop. For three days, during the training in the daytime, my ears were full of rumbling of drums. At night, I went back to my house and lay on the bed, was still surrounded by drums sounds in my mind. In this training, my biggest feeling was that I have experienced extreme release and great freedom. My life seems to be suddenly ignited, the energy like a volcano erupted, and the whole person feels extremely excited. The tree seems to be watered and the roots stretched and sprouted out. At the same time, Arthur's teaching style also brought me a new experience. Sometimes he is humorous, sometimes calm, sometimes solemn or passionate. In the whole learning process, all people enjoyed playing the drum by his facilitating.

After the training, I read the books of Arthur’s and searched lots of the drum circle videos on the internet for imitating and learning. And I practiced each facilitating technology of drum circle. After I became familiar with technical tools, I tried to facilitate different groups of drum circles. In October of that year, a large community drum circle (with nearly 100 participants, now it seems that it is only a small circle) came to me. Two weeks in advance, I started to make a detailed guidance plan. First of all, image a drum circle of 100 people in my mind, and then consider the whole facilitating scheme and specific process; design body language and every sentence to be said. After the facilitating plan was done, I began to practice the techniques lots of times in the room alone in front of the mirror. After two weeks of practicing, I confidently walked into the drum circle. That night, I and the whole group’s energy were super strong. The drum circle was full of passion and excitement. It was a very successful drum circle at that time. (When I think back to the preparations for those two weeks, I feel like I’m all "routines". I was full of ideas and plans when facilitating. Without the present, everything facilitated as the plan.) After more than a year of facilitating practice, I have accumulated some experiences and encountered many difficulties. At the same time, I also have some confusions, "What is the mission of drum circle facilitator? Where are we going to facilitate people? How can I help people find and facilitate them to the place that they want to go? "

In the spring of 2015, Arthur came to Beijing for the second time to continue his training. I arrived as scheduled. Because of the previous year’s learning and the experience of different drum circles, I felt that my facilitation was more relaxed and passionate. I have pushed the circle to the exciting climax again and again, and also experienced a stronger sense of personal achievement. Arthur came to me and gently patted me on the shoulder, he said "I see your passionate and hope to see your peaceful." This sentence immediately brought me some confusion (I believe many facilitators will have the same confusion) - "isn’t the drum circle just for people to experience the greatest release of passion?" Doesn’t the drum circle just to facilitate the participants to experience emotion climax? Doesn’t the facilitator just going to burst his energy when he enters the circle? Doesn’t the drum circle to help people achieve passionate feeling? Does the drum circle should keep people be quiet?” But I believe that there is a place in the world where I can find the answer. That is Hawaii! In 2015, VMC held the 20th anniversary celebration of drum circle in Hawaii, and many facilitators would return to Hawaii. Because of the lack of accommodation, Arthur hope people can go in the next year. But he agreed  my request when I asked him！Because my application was late and there was no place to live at that time, I had to camp with the tent. Camping is also my first experience in my life!

I think all the mysteries will be solved here. 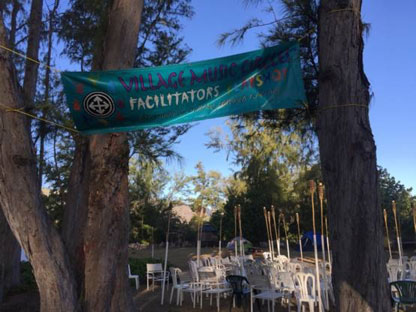 There was a little story before the departure. Because we decided to travel so late, we only made an appointment to visa two weeks before departure. On visa day, I found that I forgot to print the barcode which made me unable to interview at the time of appointment, so I had to reapply for the visa. But we only have one week to board the flight! In China, people should make appointment for visa one month advance except urgent situation (such as medical problem or extreme emergency events, etc.). People told me that my situation didn’t meet the conditions. I almost give up, but Bing wanted to try it for me. She uploaded all materials of drum circle online and explained how important the celebrating of drum circle is for us. After finished this, we have to wait for the magic happens. Incredibly! The embassy agreed to my urgent application (We are so happy and confused why they agreed our application).On the day, the visa officer asked me what will I do in the United States? I replied that I will attend the celebration of Hawaii drum circle. Unexpectedly, he was very excited. I still remembered that he turned back and said loudly to his colleagues, "he will go to the drum circle!" "Whoa! Drum Circle! "(they chatted excitedly). I can’t speak English but the process is incredibly smooth. Of course, I knew afterwards that Arthur once made a great drum circle for the staff of the embassy. Thanks Arthur!

The fourth experience of drum circle！— Find my mission!

We arrived at the VMC camp in Hawaii at last. Different nationalities, different languages and different cultures are so beautiful and natural. Due to the celebration of the 20th anniversary, many facilitators returned to Hawaii, with a total of nearly 100 people, three quarters of facilitators from all over the world with rich facilitating experience.

This trip brings me a new life experience. It is the late night drum circle that is "the best late night in the world". After 9 p.m. every night, the drum circle enters into "late night." 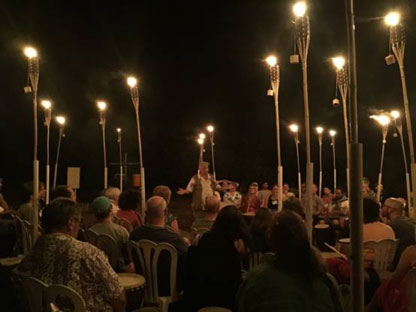 I seems like a leaf falling into the water, drifting with the wave, which surrounds me like a cradle that embraces, warms and pushes me. From time to time trickle; from time to time surging tide; from time to time gentle and elegant; from time to time vigorous and powerful; from time to time whisper; from time to time broad and profound. I was like a drop of water, immersed in streams, rivers, and even in the ocean, jumping, and constantly changing. At that time, there was no past and future, only the present; there was no thinking and evaluation, only feelings; there was no difference, only listening and cooperation. I join my music with others’. I don’t need to lead and control, but the expression is freely. You seem to follow and cooperate, and you seem to facilitate. This kind of experience is so amazing! The drum circle seems to facilitate people, leaving behind the modern bustle and noise. It makes me seem to go to a wonderful place where people contributed together, shared the creation and happiness. There is no competition, no pressure of the life; no anxiety and fear for the future; no using and betrayal in interpersonal. Everything is so sweet that people create their own happiness in life and share together. The experience in late night gave me the answers to my confusion. I finally found my mission of a drum circle facilitator.

The mission of the drum circle facilitator is: to do everything possible to help people make connection through music; to create a group atmosphere of inclusion, sharing, connection and supportive; to help people express freely in the rhythm and put down defenses or competition; to experience different, present, and enjoy the song of life together. 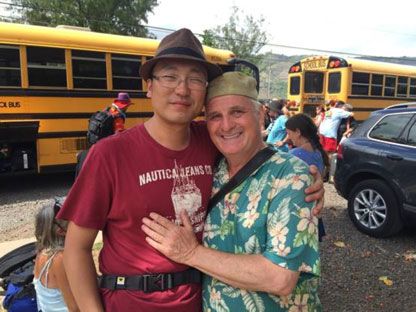