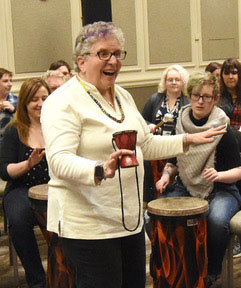 Nellie Hill, Playful Spirit Adventures, is a Remo endorsed professional Drum Circle Facilitator and certified Life Coach. She earned her MA in Music Education from the University of Maryland, with post-graduate studies at Duquesne and Villanova. Her extensive facilitator training includes VMC certification, DCFG accreditation, and HealthRhythms. She served many years as a teaching assistant for Will Schmid for his World Music Drumming Workshop. Nellie also spends much of her time doing school residencies and community events spreading the value of facilitation and improvisation in the music curriculum.

She is the co-author, along with Arthur Hull, of the Drum Circle Facilitators Handbook, which is now published in five languages.

The story begins many years ago at Camp Ramblewood, Maryland. Jaqui MacMillan and Jonathan Murray talked me into going. They said I would love it, that it would change my life. After the first 3 days I HATED it. I had my keys in my hand and I was leaving. The feedback I was getting was that I was not pretty, I didn't move well in the middle, basically that I didn't belong. And I was done! Along came Arthur. I was sitting on the bench with my keys in hand, bags packed but I was drawn to the sound of late night and wanted to hear it one last time before I snuck out of camp. Arthur sat sown beside me and talked about the wall and also let me know that he saw a talent that I needed to let out, that I needed to become me and not let anyone convince me otherwise. I stayed and the next day I asked permission of my group to let me facilitate my story. It was the beginning of a long love affair with facilitating human potential by letting my circles guide me, using what they give me, and always striving to serve the circle. I must be doing something right because the feedback I get the most is "when you enter the middle I know I will be good no matter what I do"

The next step in this story was becoming part of the launching of the Drum Circle Faclitators Guild as a member of the Board. I started as the Secretary in 2004, and have been serving the Guild ever since, now as the Executive Director. This led to being a major part of the yearly conference that DCFG arranges for facilitators where they can hone their skills, network with others that are just like them, and learn so much more about the business of facilitating.

What does that have to do with becoming a certified DCF? Well it doesn't stop there. I was trying to prepare for a circle one evening and became very frustrated with Arthur's books because the information I needed was hidden inside all his wonderful stories. So of course I met with him and outlined what I thought facilitators needed. He of course said well write it and I'll think about it. I did, he did, and the end result is the Drum Circle Facilitators Handbook that takes you from the minute you get the call for the gig to what to do when it is over.I learned a lot as I put that book together and I carry it with me to every gig as a reference tool. I hope it keeps me from getting stale, from doing the same thing because it is easier. The book is now in 5 languages!

It didn't stop there. Before becoming a facilitator I was a middle school music teacher and a teaching assistant for Will Schmid in his World Music Drum Curriculum and continued to do that for several years. I found that the concepts taught in drum circles helped my students grow not only in music but in life skills: cooperation, communication, empathy, listening. Again reflecting Arthur's triplicities. I taught middle school for 25 years. Trust me when I say drum circles saved me several times!

Being a certified facilitator means that you practice the principles the Arthur has set forth both in your practice and in your life. I was inspired to become certified because it meant I have worked hard to be the best I can. I got my MA in Music because I wanted to be better. I regret not finishing my doctorate. I am a certified facilitator because I want to always strive to be a better facilitator, to serve my circles better every time I step into the center. For the same reason I am accredited with DCFG.