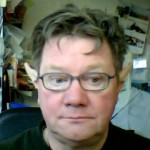 first became turned on to drumming when watching a performance in the Hawaii pavilion at the New York World’s Fair in 1964. Hawaii …. Hmmm . . .

He went to his first drum class in 1993 in York, England, and took it over in 1996. He has attended classes with Keith Jackman, Lu Pradere, Saidi Kanda, Henri Gao-bi, Lamin Jassey and the late, lovely Musa Suma and Magatte Dieng.

From other workshops and classes in singing and dance he has gained a knowledge of music, rhythm and harmony beyond drumming.

In 2000 Arthur Hull ran a two-hour community playshop in Leeds, and Steve was hooked! He has been to the Hawaii Playshop each year from 2001 to 2006, twice as mentor; once as meta-mentor; and to each UK Playshop since 2002.

He’s been to the Seattle World Rhythm Festival four times and once stepped in to run one of the workshops when the presenter was unavailable.

In June 2005 he retired from his full-time day-job as a book-publisher’s rep to develop his DCF business.

Steve is a Professional Member of the Drum Circle Facilitators’ Guild.