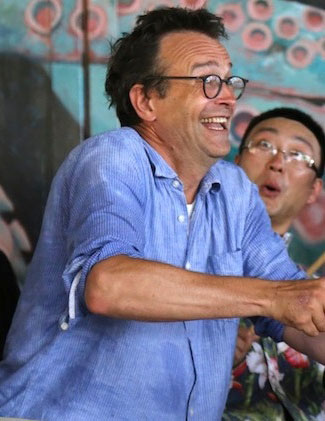 I have loved drumming all my life. When I was a child, I was almost paralyzed whenever there was some drum part in the music. Facing a marching band, I usually let go of my mother’s hand and slipped into the row of the drummers, forgetting everything but them.

For most of my childhood and teenage years, some sort of drum set was my base in life. Playing along Beatles-records, and later Earth Wind & Fire, Crusaders and Steely Dan, brought me into many deep pockets of groove. The wisdom and deep knowing in a good groove transformed into a purpose for my playing. Reaching that unifying moment of total groove, with the people I played with, was my main aim and longing.

When I later started on my music teacher education, I still thougth the trap set was the thing. I joined the college big band, and had the luck of learning a bunch of latin grooves from an inspiring and experienced jazz musician who was our leader at the time. He also introduced me to the djembe, which immediately kicked some new gates open for me. I sold my trap kit and bought myself a good Ivorian djembe.

From then on I started learning west-african rhythms and jamming and practicing with fellow musician friends. This was the late eighties, and west-african drums and rhythms were still exotic in Norway. I also discovered to my surprise that as a music teacher, playing drums, I didn’t have to leave the kids out of the drum part. Until then, I must have thought that the only way to utilize drums in a band or group is by being THE drummer; taking care of all the percussive parts from the drum stool behind the kit. Now I saw to my amazement and joy that all the percussive parts could bring much more to the group by being shared between the participants. I also learned that the different parts could easily by adapted to the individual skills in the class, still letting everyone contribute with something vital to the music. This way of teaching and introducing music, was inspired by the Danish “Rhythmical Music Pedagogy”(RMP)-movement.

When I was finished with my music-teacher education, I was lucky enough to be engaged at a Waldorf school. Here I was given total freedom to continue exploring RMP in my music lessons for classes 1-9. After ten years of doing so, and with a good deal of experience from trying out numerable rhythmical arrangements with different age-groups, I felt like taking it a step further.
That was when I received one of my first spam e-mails. (This was for the first Scandinavian DCF-training in Oslo, autumn 2003). It said something like: “Learn how to transform any group of people into a drum orchestra in 45 minutes”. My first reaction was: Hah, don’t try that trick on me, - I’ve been doing this for a decade, and I know it takes a lot more!”. Still, I had a voice inside saying: “Check this one out. If it doesn’t work, - you have at least tried. But what IF it works? Imagine what that could mean to you!”. So I ordered Arthurs first book, ate it in big chunks, and registered for the playshop (to a guy named Mikael Khei). And yes, as you know - it worked!!

Since then, I have attained 19 VMC trainings, including seven I have produced myself in Bergen in the West of Norway. Two times done the mentor training; in Scotland and in Hawaii. Mikael and Arthur have become dear friends and colleagues and so have all the other amazing brothers and sisters I have met in this magical community.
Arthur said: “Go to the kids – they are the best teachers. If you are in it for the money, - they will make you earn it!” So I started out touring schools for about five years. I experimented a lot with how to do it, how to find what worked for me. Along the way, I realized that a steady pulse on a djun, subdivisions on a shaker, along with a cowbell with a pedal on my right foot, and a tambourine on my left, worked for me. Now I could utilize some of my drum kit experience to keep a small start-up percussion group going. This provided a safe rhythmical environment for the kids. As I learned more about their skills and need for challenge, both individually and as a group; I could easily leave out or change parts in my own playing to facilitate their progress and independence.

I have also had gigs with mentally challenged kids and adults all the way. This experience has taught me much about how to really listen – to what is really the meeting point with that other human being.

After these five first years, I started doing programs for kindergartens. This was a totally new universe to me. The leaps that kids go through during their first five years, are so radically life-changing; learning to walk, talk, eat by a table, socialize, live without diapers – to name a few. Therefore, I recognized I had to develop programs especially designed to these age groups. After half a year of low-budget experimenting in a welcoming kindergarten, I finally had the concept worked out; one program for the 1-2 years old, one for 3- years old and one program for the 4-5 years old. Since then I have visited around 200 kindergartens, offering programs for the staff as well as for the kids.

Arthur was so right – I learn tons from making it work with kids. The main thing: “Every day, every moment, every encounter is an opportunity that is brand new and fresh. Be awake and present and don’t lose touch with the present moment. It’s all there!”

After about five more years, I started do drum circles with well-elderly groups; with different grades of functioning, from retired and self-going grand-parents with still a lot of appetite for life, - to individuals with heavy dementia. Here I mix between good old known songs and the groove of all of us playing together. Every little sound and movement is welcomed as a contribution to our music, celebrating the joy of sung memories and shared creation.

I have also done quite a few drum circles with companies and master programs, where the focus has been on listening, supporting, giving space, making musical “in the moment” agreements, creative dialoguing and leadership. It is amazing how suitable the drum circle is to exemplify the processes inside of a well-working team. Diversity as a richness; the orchestra as our way to accomplish something together that none of us can do on our own.

After fifteen years of running my own one-man-company TROM (Norwegian for DRUM), I wrote my master’s thesis in music pedagogy about the drum circle as a phenomenon. Through this process I had the luxury of taking one step back to look at my own praxis through different theoretical frameworks. This work expanded my consciousness related to what can happen inside a drum circle. Especially I found Mihaly Csikszentmihalyi’s Flow Theory relevant to better understand what makes the drum circle so unique.

From the first time I met Arthur Hull in 2003, I knew this was going to be my next teacher. Since then I have learned about life, friendship, community and the world through the metaphor of the community drum circle. And yet there are always new levels to be discovered along the way, adapted to the challenges I meet in my everyday life. The drum circle has actually become my main lens through which I perceive what being is all about. What a bliss!