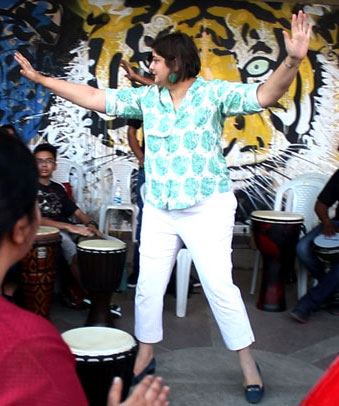 List of Playshops Co-Trained with Roberto Narain and others

Vasundhara Das is a multi-faceted, multi-lingual personality successfully straddling many worlds. She is well known for her skill in both the film and music industries in India. When it comes to singing, she has trained in Hindustani Classical Music from an early age & has made her mark in the popular music scene in India with many hit songs in Indian films. She has also been collaborating on many independent music projects over the span of her career so far. Her current focus is on music composition at her Bangalore based studio called The Active, where she creates original independent music. Vasundhara also performs extensively on stage, in solo appearances as well as along with her band.

Vasundhara and her partner Roberto Narain run Drumjam, one of the organizations that pioneered the use of drum circles for corporate training, team building and community building at corporations, communities, schools and colleges in India. Drumjam, over the past 10 years, has worked with diverse communities as well as leaders of industry across all sectors and has made approximately half a million people experience music through group drumming.

In addition to her extensive training and experience as a musician, Vasundhara has trained in Drum Circle Facilitation with Arthur Hull. She has also trained with Christine Stevens as a HealthRhythms Facilitator. Over some time now, she, along with Roberto and their team, has been facilitating Drumjams for many varied groups of people such as Corporate, Community, Schools & Colleges. With experiential learning as the core intent, she facilitates programs that expose participants not only to an interesting mix of elements of music like rhythm, melody and harmony, but also encourage creativity using related artistic elements like body percussion, movement and storytelling, in a format that is very interactive and engaging.

In the year 2017, Vasundhara & Roberto started the Community Drumjam Foundation in order to take this activity to people who were unable to access their monthly Community Drumjams such as children at risk, physically challenged individuals, well elderly, elderly with Dementia, Parkinson’s and Alzhiemers, recovering addicts and many more such populations.

In 2017, Vasundhara became a Certified Trainer for Arthur Hull’s Village Music Circles Global in India, in order to train and empower others with skills of drum circle facilitation so that there can be a greater impact of this work in her country. She is one of 14 International Trainers who constitute the Village Music Circles Global Trainer Team.

Presently, Vasundhara alongside being a Drum Circle Facilitator and VMC Certified Trainer continues her work as a recording artist, composer and performer.

I’m a singer who has been studying music since the age of 6. Although I completed a bachelors degree in Economics, Statistics & Mathematics, I’ve worked in the popular music and film industries in India for over a decade. Opportunities presented themselves and I went with the flow, recording some really popular hit songs in India and acting in many box-office successes in multiple languages. If I think back to a time when I was in high school, dreaming about being a popular singer, it all came true for me early in life. And after fifteen years of touring with concerts around the world, I needed to stop and go deeper.

My partner Roberto Narain is a drummer. But more than that, he has been a kind of mirror for me. Someone who could cut through all the mirages of the world I inhabited and get right to the core of things, be completely honest. He has been a celebrated drummer in the independent music scene in India for many years. At some point in his journey, drum circles appeared in his life. And after having facilitated a few, he felt the pull towards a deeper understanding of it and that’s how Arthur Hull appeared in our lives, first as Roberto’s teacher, and subsequently, as mine.

Arthur famously says that you only meet the knowledge you seek when you are ready to receive it. And that’s exactly how it played out for me. When I was ready for a deeper understanding of who I am, I met Arthur and his merry band of singing, drumming, ukulele playing elves.

My first encounter with this community was magical and life altering. The setting was Hawaii, at the Playshop. We were a smaller group that year but that meant the impact of what we were learning was so much deeper. Although I had Roberto there (he was on the mentor program), and he had been a big influence on me, mentoring and guiding me since we met, I was grouped in with Myoung-Hun Song (Mentor) and another Korean mentee (Seong-Hwan Dono Ahn), both of whom spoke fluent Korean, as expected, and some basic English.

Rather than this being a barrier for us, I think all three of us were more present for each other and were listening more intentionally and learning so much from each other. That whole process was completely experiential for me with very few words and it summed up the power of what I was learning, so beautifully. In a perfect world, where music is the main medium for communication, no words are actually required.

At the end of the Playshop, when Song and I gave each other some feedback, there was happiness, tears, lots of hugs and a whole lot of acceptance, of ourselves and of each other. My bond with Song is still as strong today. It was built on such a strong foundation. It’s just the nature of the connections you make in this large global family.

Roberto had had a different experience with his Mentees, and the result, I imagine, was that he was forced to look at what was really important to him in his life. Coming out of that Playshop, he proposed to me on the beaches of Hawaii after twelve years of being together, I agreed and we got married that same December, surrounded by our families, friends and our drumming family from the Hawaii Playshop on a beautiful beach in India.

The following year, I returned to my touring life, performing concerts with my band, as Roberto got deeper and deeper into Drum Circle Facilitation. As a concert performer, I have always been heavily invested in getting my audiences to interact with me. I have audiences singing along, moving and interacting. But the transition from being that sort of performer, to gradually using Arthurian Drum Circle Facilitation techniques to communicate with my band and also to encourage and empower audiences even more at my concerts, happened without my realisation. Roberto brought Arthur to one of my concerts in India and when they met me backstage after the gig, Arthur pointed this out to me.

In the years after I started attending Playshops in different parts of the world, Arthur had quietly (or maybe not so quietly) infiltrated my sub-conscious, and his techniques were making me connect more with my audiences. The performances were better and the experiences, more powerful - I could see this on the faces out there. I was more aware and using my radar - visual, auditory and kinesthetic - to feel the pulse of that particular audience on that day, and choose my repertoire accordingly in that moment. I was developing better body language - readability, telegraphing and congruency - to better communicate when I wanted them to interact with me. I was using better presentation skills - vocal skills, group leadership and body language - to facilitate them, rather than perform to them. It was exhilarating for me, especially after I became aware of what was going on.

I need to acknowledge my transition from the stage to the centre of the circle. The stage has been my home. I’ve been dwelling there ever since I turned 18. It has been a place of comfort, with the adrenaline and all. But being in the center of the circle was intimidating and overwhelming at first.

There was no safety net of the popular music repertoire that people in my country know every word of. This was different. Spontaneous, in-the moment music. I had to be the one to get my group to that place where they were making their own beautiful music together.

Each time, I had to first help my group get over the reference they carried of me from my other job - the recording artist and stage performer of repute. I needed to also break the cultural perception that maybe I was there to teach them something they thought I was better at. I needed to help them feel comfortable and let them know that I was there in a different role that day - to serve them, help them find their inner musician, that I was not there to judge them and that they could trust me. I had to learn, to quickly let them know, that each of them was unique and every single person's contribution to the group’s overall musicality was valuable. To be non-judgemental and open is key to being in service here, something that comes with some difficulty to many “musicians”. I’m truly grateful that, thanks to the honesty and love from my family, teachers and friends whom I have learnt a lot from, I was able to stay in touch with my humanity and not get lost in the process.

It has helped me stay authentic and grounded and fully live the experiences I have chanced upon and stay in the moment - ready to ebb and flow on the path I’m on, in full acceptance of all the beautiful adventures that have passed and that are yet to meet me. When I think about what I’ve learnt on this journey of drum circle facilitation, I think I can say with all truthfulness, that I have learnt a new way of living my life.